Wow, this was quite a day, highlighted by an unexpected car cruise, travelers from Finland, and a big storm and a rainbow on the way home. I'm kind of beat, but must get up early to be in Afton to meet the Frenchman on stilts tomorrow. I'm tellin' ya, there's rarely a dull moment at Afton Station!
Shortly after I arrived at the Station, a parade of T-birds pulled up out front and 18 people emerged. The Tulsa Thunderbird Club was heading for the Coleman Theater in Miami and stopped in Afton for 1) a bathroom break and 2) to see the cars (in that order... LOL). It was great to see them and have a look at their pretty cars. 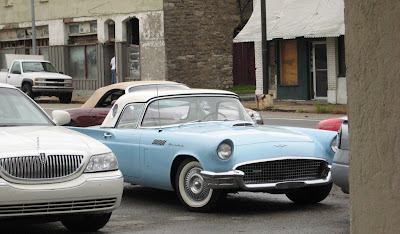 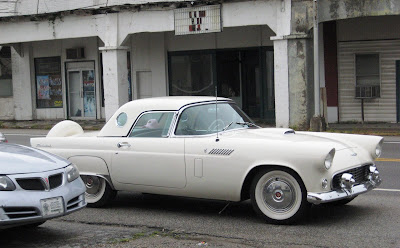 Once they left, everyone else arrived. In all, we had 49 visitors! They were from Lexington MO, O'Fallon IL, Whitesboro NY, Valley Center CA, Fayetteville NY, Sapulpa OK, Irving TX, Dallas TX, Hudson NH, Grove OK, Ft. Worth TX, Lamar MO, Oklahoma City OK, and Finland.
The two couples from Lexington MO were having so much fun and really enjoyed the Afton Station experience. 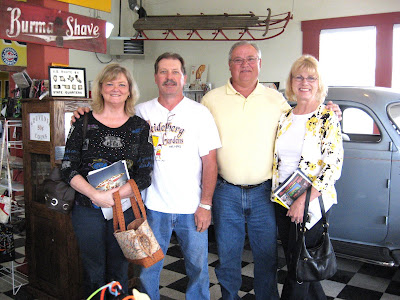 An unfortunate lady from Irving TX, in Oklahoma for a square dance convention, found out this morning that her house was damaged last night by the tornado that hit that area yesterday. Fortunately, her son is a roofer and had immediately gone to her house and covered it with plastic. Not fun news when you're away from home!
The folks from Finland were traveling in rented motor homes. They came toward the end of the day and told Marly (who helped out today) and me that there were about 50 more people behind them. I waited until 4 p.m. and none of the rest of them arrived, but Marly said he'd wait until 5 to see if any of the others showed up. There may have been a language misunderstanding, because they were driving west-to-east, and I certainly didn't see 50 more rented motorhomes heading toward Afton as I was heading toward Tulsa. 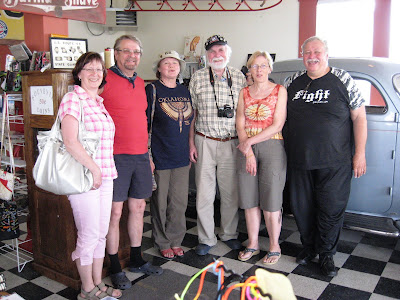 Tattoo Man was with us for a couple of hours this morning, and Betty W. stopped in, too. Marly really helped out a lot with showing people through the car museum.
On my way home, I drove through a couple of major thunderstorms. There was an incredible rainbow near Tulsa as the rain was ending and the sun was emerging, but unfortunately it was behind me. I tried taking a picture of it in my rear-view mirror, and here's what I got. 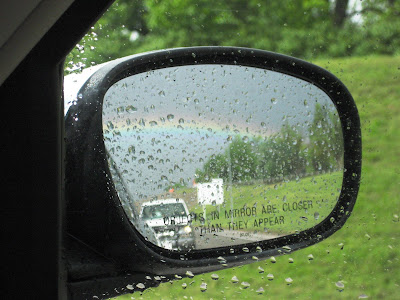 Remember the field I'm photographing once a week in order to record the growth of a crop? Well, here's the photo I took this morning. The crop's up! 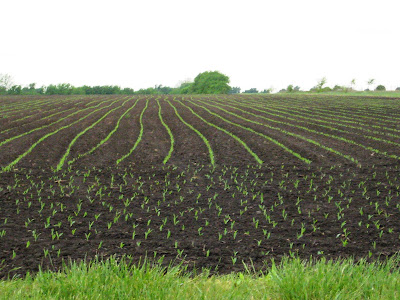 P.S. Saw a posting on the blog of the woman who's traveling Route 66 on a horse. She expected to be at Afton Station next week, but the posting simply says "No horse...no ride. Two weeks is the earliest I can ride again..." I do hope nothing awful has happened to the horse, but I haven't heard anything from her personally as yet.
Posted by Laurel at 6:06 PM

Glad to hear that things are really picking up at Afton. Winter is over...YAY!

Thanks for the update dear friend. Hope to see you soon.