Things I saw on the way to Afton 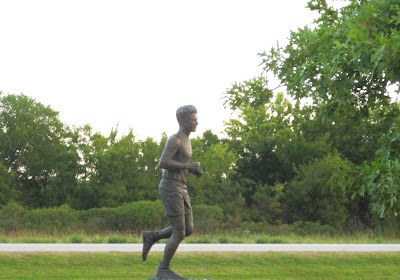 You can imagine my surprise when, while driving down old 66 in Foyil this morning, the ghost of Andy Payne jogged past me in the early morning semi-light! Naturally, I pulled over beside him and attempted to engage him in conversation. I wanted to ask him what it was like, back in 1928, when as a 20-year-old farm boy he managed to win the Transcontinental Foot Race over scores of professional runners, and how it felt to endure the hardships of inappropriate footwear, inferior nutrition, and marginal accomodations for the 84 days it took him to run across the United States. But then, I wiped the early morning haze from my eyes and realized that Andy wasn't answering back. He never even acknowledged my presence. He just kept running. And running. And running. (Amazing what photo cropping can do, isn't it?) 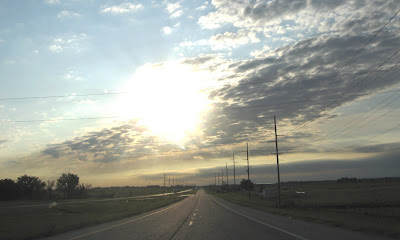 Finally, a little further down the road, the sun rose. . . 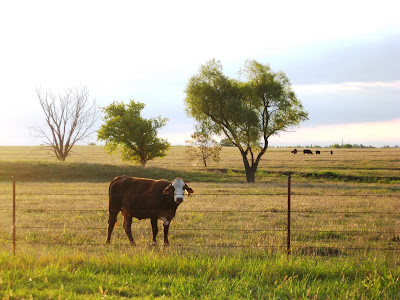 . . . and this gorgeous cow didn't seem to mind a bit if I interrupted his breakfast by asking him to pose for a picture.

No sooner did I get to Afton that Tattoo Man arrived just behind me. And only moments later we had our first visitors, three couples in three nice cruising vehicles. 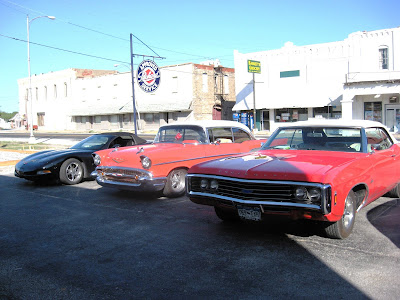 Those folks were from Milan MI, Grass Lake MI, and Loveland CO and were all traveling together, covering a good portion of Route 66. They all carried their copies of Images of 66 and asked us to provide autographs. That seems to be happening more and more lately. Many travelers are carrying something to be autographed, and I'm always kind of embarrassed to provide my rather insignificant signature. But hey, it ain't easy to be a star. [Very big ha ha]

A very handsome young couple from Italy arrived next. She was from Venice, he from Padua. They spoke very little English by I managed to gesture them around the Station, and I could tell by their permanent smiles that they were satisfied. They even attempted to ask for directions to some sites along the way, and I attempted to provide them. The jury is out as to whether they ever got there.

Later in the day, we greeted visitors from Muskogee, Pryor, Sand Springs, and Tulsa OK, White Salmon WA (love that town name!), and Emmaus, PA. Quite a few of our guests arrived on motorcycles, and I can't blame them. It was another absolutely perfect day for being in the open air.

Amidst all of this, I gave a cursory cleaning to the fridge and the microwave. You can't say I don't have an exciting life!
Posted by Laurel at 5:04 PM

Jim Thorpe is remembered as one of the, if not THE, greatest athlete's in history. And, he should be.

But, I feel Andy Payne's place in history has been denied him. Running across the country, especially at the time and in the conditions he ran, was a gruelling feat.

I feel he deserves to be named alongside Jim Thorpe.