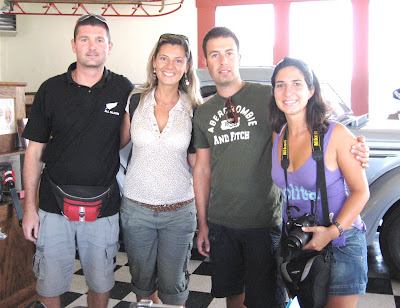 This handsome group of visitors were actually our last guests at Afton Station today, but they're such a gorgeous and happy bunch that I decided to put them up front. They're from Florence, Italy, and they're thoroughly enjoying their 3 weeks in America -- on Route 66, of course. They were especially enchanted by the penny pressing machine. I had trouble imagining that anyone from the beautiful, historic, and cultural city of Florence would get such a kick out of dear old Route 66, but they're as excited about Afton, Oklahoma as I was the first time I saw Florence. 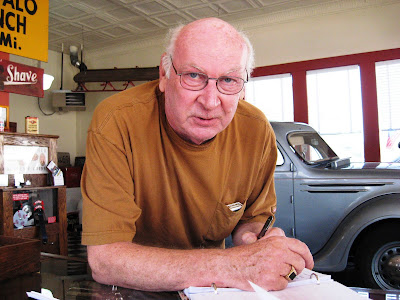 We had so many interesting visitors today! Here's W.W. Davidson from Coweta, OK who was our first visitor of the day, and who managed to start my day with laughter at his great sense of humor. 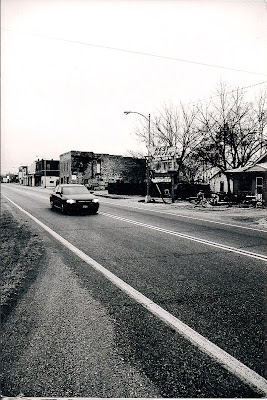 Another visitor was Michael Scruggs, an artist/photographer from Commerce, OK who has visited before. He always comes with new photos he's taken along the Mother Road. He gave me this one of Afton, which will be featured in the book he's writing right now. He pulled out his laptop and showed me several of many hundreds he's taken for the book. The last time he was here, he gave me some interesting photos he'd taken at Afton Station then hand-colored. He's really quite talented. 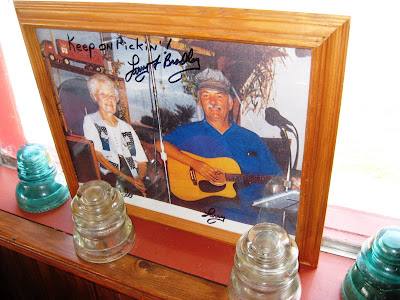 Yesterday, Larry "Grandpa" Bradley sent me this photo of his mother and himself. He's the singer/song writer who produced the "Route 66 Lost and Found" CD which I sell at Afton Station. His mom accompanies him on the harmonica. If you haven't heard his music, you should. He writes whimsical tunes which I find myself humming long after I've left the Station, and he has a great voice. 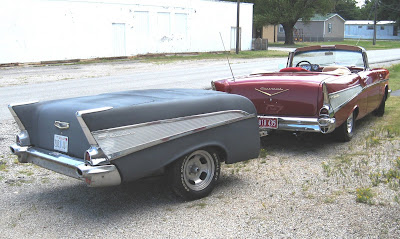 Four visitors from the Mississippi Rat Pack Car Club came to visit. One couple was in this interesting rig.... a '57 Chevy pulling a trailer made from the rear end of another '57 Chevy. The couples were from Hamilton, IL and Elviston, IL. Since Tattoo Man Jones drove his own red, white, and blue '56 Chevy to the Station today, there was much Chevy bonding occuring during the visit from these folks.
Ron M. came up to Afton with me today, and as I said previously, "Tattoo Man" Ron was there, too. Betty dropped in for a while, so we had a full house. Other visitors included truckers from Cleveland TX, a couple from Yantis TX, and a family from Gallion, OH. It was a very busy, varied, and most interesting day.
And finally.... for your viewing pleasure..... Tattoo Man's latest Route 66 tattoo. Bye! 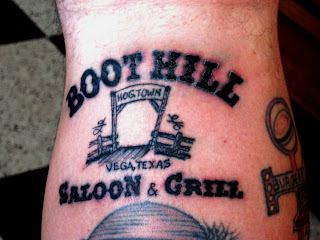 FYI, Laurel: The Ponte Vecchio is the Medieval bridge in Florence, Italy we were trying to remember the name of today.

Yes, Ron! I thought of it shortly after I got home, too. Great bridge, but too many awesome shops on it, making it a very expensive bridge to cross. :-)

I love that trailer...that is so cool!

I have the route 66 album by Larry Bradley and I love it. A couple Christmases ago I bought ten of them to give away as gifts.

Do you have Larry's email address?

I sent Larry's email adddress to your email.