Laurel, the Proprietor
Ron M., the Proprietor's right hand man
Ron "Tattoo Man" Jones, newly tattooed
A traveling couple from Woodstock, VT
Ken and Bev Martin from Dallas TX, Yahoo Route 66 group friends
The Exterminator
The Exterminator's Daughter
Family of Four from Carthage MO, out for the day
Young folks from London, England
Act I: Morning in an old filling station in the broken down town of Afton, on Route 66.
Summary: Tattoo arrives first, followed shortly thereafter by Laurel and Ron M. Woodstock, VT couple arrive and are followed closely by the Martins, who have been to Afton before and whom we know from Route 66 festivals and such. Much talk. Tattoo partially disrobes to show new tattoos. "Signing of the Maps" ceremony. 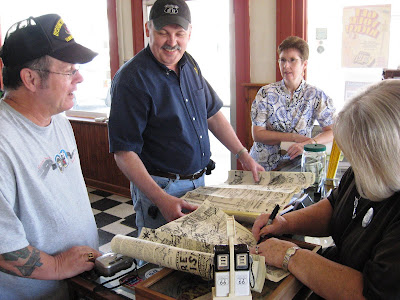 Summary: Proprietor and Ron M. eat deviled eggs and a raisin bagel. Tattoo leaves. The Exterminator and the Exterminator's Daughter arrive and annihilate all crawling bugs, then annihilate some coins in the penny smasher. 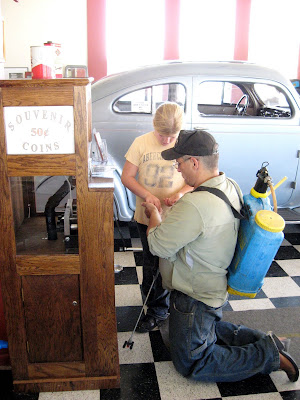 Act III: Late afternoon at above Station.
Summary: Family of four from Carthage, MO arrives, plays with the penny machine and visits the cars, a mother, father, slightly bored teen age daughter, definitely NOT bored young son. Father relates tales of his youth, when he hitchhiked for several years all over the county. Proprietor makes new window sign from printing done by Right Hand Man at home. Looks great. Proprietor thanks RHM very much. As the sun sets in the west, young couple from London, England enters. Taking a three week Route 66 trip. Proprietor and Right Hand Man close up shop. EXEUNT 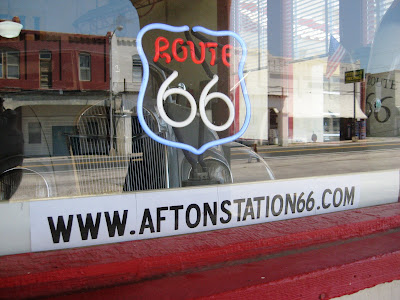 Author's Note: Ok, maybe it's not all that exciting even when I try to dramatize it! But we like it! So stay tuned, because tomorrow I am going to tell you all about soybeans! Really!

No gunfights! No car chases! No explosions! No buxom, blonde, scantily-clad women!