It's hard to believe that the full moon was two nights ago. I could swear it was right now, judging by the number of lost people who wandered into Afton Station today. There were three in a row, at one point. One poor lady simply walked through the door, sighed, and uttered "Where am I?" The other two were equally confused. This really hasn't happened before. They were all trying to find different locations. For a while, Ron M. and I were beginning to think we were on Candid Camera! Among the 39 visitors (apart from those three who just wanted to get directions and weren't interested in seeing the museum), there were several others who were confused about their location as well. What's going on?

Yes, I did say we had 39 visitors today. And allow me to add that it was one of the more interesting and varied groups we've ever had. Unfortunately, there wasn't much time to spend with any one person, but we did get to make the acquaintance of some great folks and my voice didn't completely crap out by the end of the day.... amazingly enough.
We only greeted one foreign couple this afternoon, coming from Australia and embarking on their Route 66 tour with great enthusiasm. Here they are, on the right. The other couple in the picture was equally enthusiastic, although from just down the road in Tulsa. It was fun to see them chatting and taking pictures of one another as they walked out of the Station together. We're just doing our part for international relations! 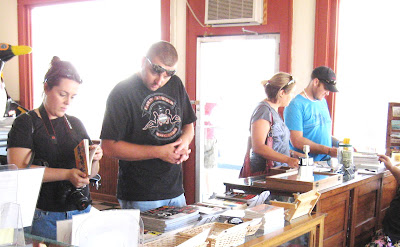 Another special couple were Alla and Joe, from Palentine, IL. I just took a liking to them because of their enthusiasm for Route 66 and their determination to do it right. 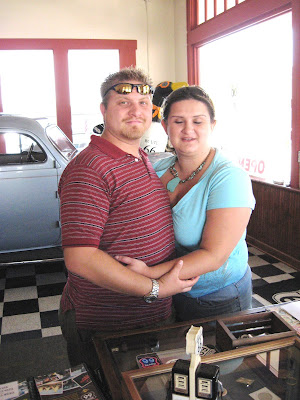 It was also a good day for sales. I opened the cash box more today than ever before, I think. Other than those mentioned above, visitors came from Jenks OK, Munster IN, Muskogee OK, Fremont OH, Blanchard OK, Owensboro KY, Villa Rica GA, Fort Worth TX, Locust Grove OK, Oletha KS, Oklahoma City OK, and Springfield MO.
______________
A little news about yesterday: As you know, I wasn't at the Station on Friday. Marly came around noon, just to do some work on the cars, but he barely had time, as he had an onslaught of visitors. In just a couple of hours, he had visits from 14 people from France, 5 travelers from Spain, 4 from Minnesota, and one from Kentucky. Wow! I am so grateful to Marly for treating the visitors so well and taking time from his own work to do so. He sold a lot, too. In fact, tonight I need to do some reordering. I'm running out of merchandise!
Posted by Laurel at 5:43 PM

WooHoo, time to reorder - glad it has been a good couple of days :o)

Wow, sounds like a great couple of days! Now if you could just get those lost people to stick around a while! That's hilarious that someone walked in and said, "Where am I?" Hugs, Beth