Right out of the starting gate.... 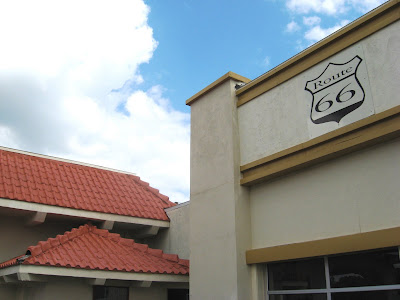 Ron M. took this picture this afternoon. Pretty neat, eh?
Even though Ron M. and I arrived at Afton Station about 15 minutes early this morning, we had a greeting party waiting for us when we pulled into the parking lot. One early visitor was a Route 66 friend from Clarksville, IN who goes by the name of Joanie the Cruiser. She's a veteran Route 66 solo traveler, and on this trek she's off to the Route 66 Festival in Flagstaff, AZ and beyond. She has over a month to make the trip. Joanie travels with a t-shirt upon which she gathers autographs of folks she meets along the way. Now, thanks to Gary Turner, proprietor of the restored Gay Parita service station on Route 66 in Missouri, she has two. Here she is with those shirts. 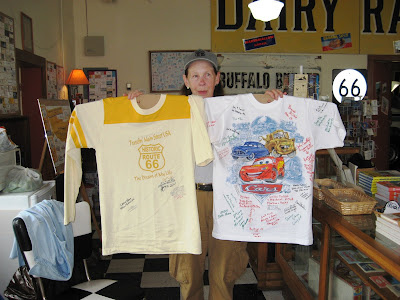 The folks from Miami OK caught my special attention because the gentleman moved to OK recently from the town in which I was born -- East Cleveland, OH. He was even familiar with the street we lived on when I was born. I always get such a kick out of meeting people who have some connection, however small, with my past. 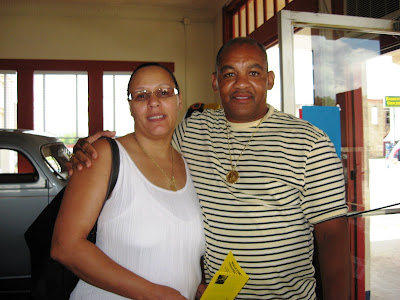 It was a cool, sunny day today, and we were able to sit outside when we weren't dealing with visitors indoors. It remained cool all day, and now there are some clouds in the sky that might mean rain is in our future, although I don't believe it's predicted. The numerous visitors on motorcycles today were all thrilled by the perfect biking day. With luck, tomorrow will be the same, and I'll be in Afton to enjoy it.
Posted by Laurel at 5:57 PM

Ya know, Laurel, you don't need to go see the world.

The world comes to see you.