We are taught that boredom is the sign of a non-creative mind. This being said, I confess to feeling a slight sense of boredom as I drove the 80 miles to Afton this morning. Since I pass the same scenery 8 times a week, I've partially forgiven myself for this lapse, although today my "non-creative" mind went directly to work looking for anything that would assuage the boredom and set me on the right path again. [Hmm....perhaps boredom is a means to an end rather than the end itself. I'll give that some thought.]

Anyway, I amused myself today by jotting down a number of activities that would cut the boredom on my trip to Afton in the future, some more fanciful than others.

---- Stopping to pick wildflowers by the side of the road

---- Taking a short drive on a different side road each day (until I run out of bigger roads and get shot by an irate rancher upon whose property I've trespassed. I imagine that getting plugged by a shotgun would cure my boredom!)

---- Stopping to read the labels on the whiskey bottles in the ditches. (Today's was Jim Beam.)

---- Counting church buses (if I can count that high!)

Once at Afton Station, it didn't take long for the boredom to dissipate. First visitors were a nice couple from Elmhurst, IL who stayed a while while we chatted about their trip, old cars (theyhave a '30 Model A) and their grandchildren. Another Chicago suburban couple followed closely on their heels.

I got a call from Ron Stahl at the TV show "Discover Oklahoma", asking if they could come to film at Afton Station tomorrow, so I'll have to rush there from dialysis. It should be a crazy day, but since the TV show is very popular all over the state, I wouldn't think of missing this chance to be featured on it. Yippee! Further details tomorrow...

Betty came and stayed for a while. Marly arrived to begin the arduous task of cutting the grass that hasn't been cut in two weeks -- in 100+ temperatures! David got home from his trip to the Black Hills, with news of progress on the building we plan to put behind the Station so we can display more cars.

Remember the Afton water tower I mentioned the other day? 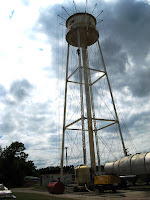 The CE from the water inspection company came in to see the cars and I grilled him for more than a half hour about what's going on at the tower. Seems it's being completely cleaned, inside and out, and painted. He said that the metal "guy wires" that are strung from the top of the tower to the ground are the structure for a TEPE (Temporary Environmental Protection Enclosure). When they're ready to paint, they'll completely enshroud the tower with a material to keep paint dust, etc. off the town. I learned lots more, but won't bore you with all of that.

Now, some random photos I took this morning.... 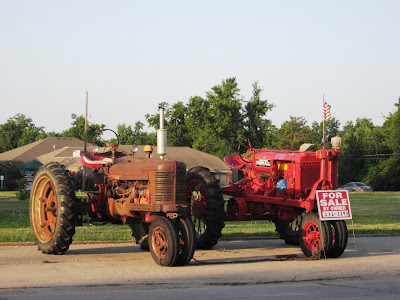 A couple of nice vintage tractors being sold at the side of the road in Claremore. 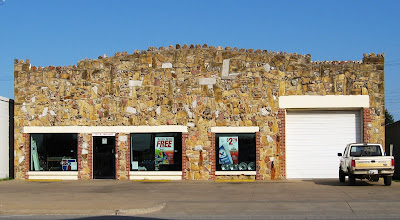 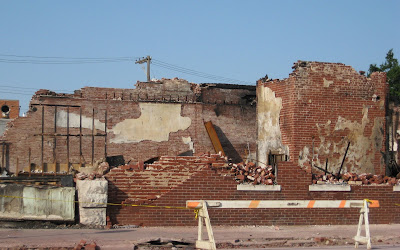 This old building in Vinita was not so lucky. It burned down this week. 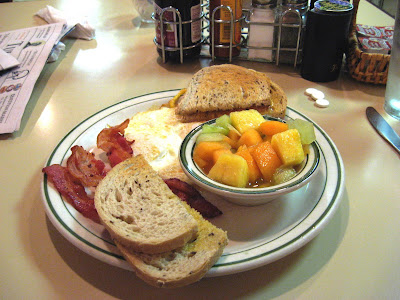 I photographed my breakfast again. What's wrong with me? Same breakfast, different restaurant. :-)

You could also buy a motorcycle to ride to work.

Listen to Rush Limbaugh. At best, you might become Conservative. At worst, smashing your fist into your radio wouldn't be boring.

Rent a limo, and have the chauffer drive you to and from work.

Trevor -- Your first and last suggestions both sound extremely tempting, although I'm a little cautious when it comes to motorcycles. As for No.2, I'd definitely smash both fists, and probably my head too, into the radio if I had to listen to Rush. Love your sense of humor, though!!

I find NPR helps with my daily commute (only 45 miles each way :o)

If I had to listen to Rush for longer than 10 minutes, I think I'd be driving headfirst into a concrete embankment. I like your thoughts on the rare times when you feel bored...perhaps a chance to break routine!

Cool about your interview--good luck!

"Executing host duties flawlessly, serving humanity, with talent on loan from GODDDDD! And with half my brain tied behind my back just to make it fair. Documented to be almost always right 98% of the time."

Are y'all screaming yet?

Nice dispatch and this enter helped me alot in my college assignement. Say thank you you for your information.

Well I assent to but I dream the brief should secure more info then it has.