I had a whole post ready to go this morning which dealt with my feelings about the speeds at which folks drive on old Route 66. It boiled down to this: There are two kinds of drivers, those who are in a hurry and those who aren't. Lest you think, from what I'm about to say, that I'm one of those old farts who putters along at 20 mph, I need to set you straight. Actually, I'll let the two -- yes TWO -- speeding citations I've received in the last couple of months do that for me. [But that's another story. Don't get me started. :-) ]

Anyway, what I was going to do was ask that folks don't do two things -- don't drive 20 mph on a two-lane with a 65 mph speed limit, and don't drive 85 mph on that same two-lane. If you must go 85 mph , get thee to the Interstate! If you must go 20 mph.... well, just don't. I encountered both today on my drive to Afton. There are countless times that I, too, have wanted to slow down to 20 mph on Route 66. It's so beautiful, there's so much to see, and I'm never in a hurry because I have the good sense to leave early for any deadline I have to meet. Lateness is my biggest pet peeve, after all. But I'm perfectly capable of pulling over to the side of the road if there's something I want to study more carefully, and it seems others could do the same. That also happens often. Conversely, don't pass me going 85 mph. It's just not safe!
I know that Route 66 is known for slow travel, and I'm a big fan of that. It's one of the reasons I rarely use the Interstates. But I try to always be courteous and aware of those with whom I share the road. I wish others would be the same.
Anyway, I was going to say more -- much more -- about driving, but then this news piece showed up on our Tulsa Channel 6 KOTV news yesterday that addressed a similar subject. KOTV and it's sister station in Oklahoma City sent out two of their reporters to drive between Tulsa and OKC, one on the Interstate and one on Route 66 (which they call "the Shunpike", an old term for any road that is an alternative to the main road). The purpose was to comment on 1) the time variations of the routes, 2) which trip was more interesting in terms of what was to be seen and 3) whether it was worth taking the longer route just to avoid the turnpike tolls. You can imagine the results. They comment on their trips here: Video Page 2009 - NewsOn6.com - Tulsa, OK - News, Weather, Video and Sports - KOTV.com It's really quite interesting.
Now to the main subject. . . Afton Station, of course! Today was reasonably un-crazy, with just 10 well-spaced visitors. They came from Chambersburg PA, Joplin MO, Miami OK, St. Louis MO, Dallas TX, and Belleview WA. The fellow from Miami OK told me he used to work at the old Ben Stanley Cafe in Miami, and the name rang a bell so I got out my old postcards and found this one of that very eating establishment, which apparently has been gone for many years. Here it is! 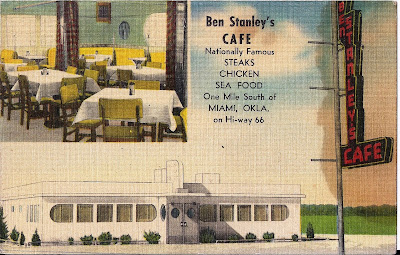 He also said he used to paste bumper stickers on the cars that came to Buffalo Ranch, a job that apparently was doled out to high school kids during the summer. For a time, the gentleman moved to Nevada to work in the uranium mines, but returned recently.
David was at the Station today working on a car. He told me he had visitors from South Africa yesterday. Another country for my list!
On the way home this afternoon, I ran across another small wagon train heading for Vinita. Is there some kind of rule that you have to arrive at the rodeo by wagon train? Does that mean that if I want to go to the rodeo I need to find a wagon? Well, I just happened to take a picture of this one early this morning (before sunrise) in front of a barbecue joint in Claremore. I suppose I could snag it if necessary. Or, maybe not. :-) 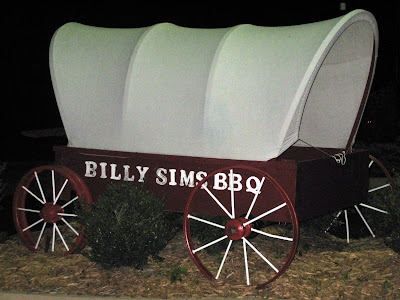 Totally agree, DO THE SPEED LIMIT, or get out of the way :o)

Last saturday we went to Alabaster Caverns, up around Woodward, OK. We were going to take their Lantern Tour, which began at 7:00pm. I figured it would take about 2 1/2 hours to get there, so I allowed 3 hours to drive there. We left here at 4 pm.
We made it with just 5 minutes to spare, and that was only because, for about the last 20 miles, I was going 90 mph.

Anyone who goes 85 mph on Route 66 is not only missing the whole point, they also obviously haven't heard of one of its nicknames: Bloody 66. Hugs, Beth

Laurel, I remember The Buffalo Ranch from when I was a kid. Dad was at the wheel for our trips from St. Louis to LA. Maybe you could point out the location of the old ranch to me when we come through in October?