I've mentioned before that I'm the pits when it comes to multitasking. When people say, "She can't walk and chew gum", they're talking about me. In this respect, the car radio is both my friend and my nemesis. Previously, I've confessed that I can't listen to music when driving. I can, however, listen to National Public Radio or Howard Stern, as I enjoy talk radio. But on the way to Afton this morning, I did an experiment. I turned the radio off. I saw and felt so much more! It was a remarkable experience to absorb the sounds of silence through every pore of my body. I was inspired! I was Queen of the Road! I even opened the windows (oh, horrors!) and enjoyed the cool morning air and changing aromas as I passed between small towns and countryside. I stopped in Chelsea, which is a never-ending treasure trove of photo ops, and snapped a few pictures. (If any of these are repeats, 'scuse me. I was under the influence of fresh air.) 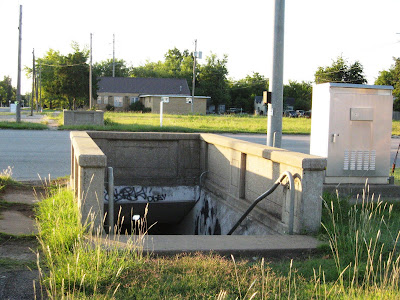 The under-road tunnel in Chelsea. It was built when there was so much traffic going through town on Route 66 that it was unsafe to cross above ground. You can see the other side of it in the distance. 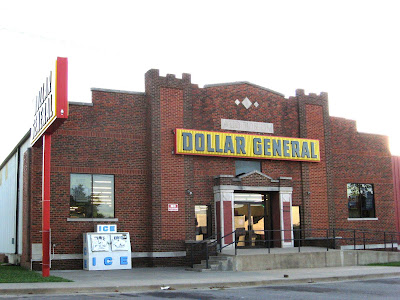 Chelsea's Dollar Store is in the old school auditorium. Different! 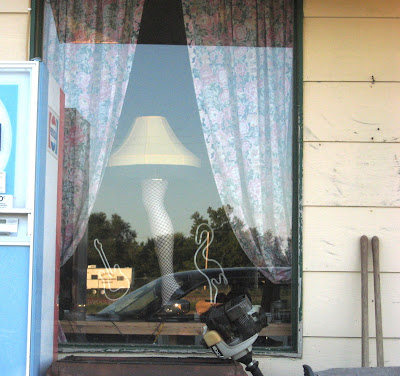 Look! Look! A leg lamp in the window of a flea market in Chelsea! As a huge fan of "A Christmas Story", I want it!

Then, I went to the car wash in Vinita, where I haven't been so turned on by pretty colors since the last time I indulged in a mind-altering substance. This fresh air thing is groovy, man! 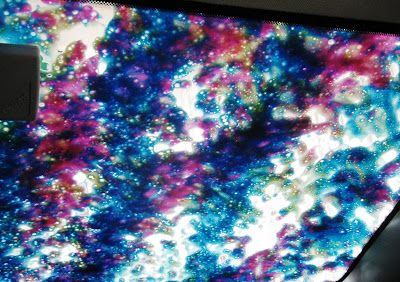 At the Vinita car wash, they use strange colored soap! 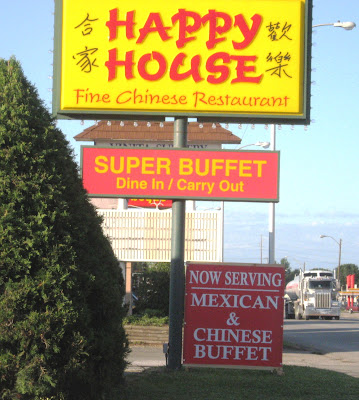 Only in Oklahoma..... ChinMex cuisine?!
____________
Now I'm in Afton, and I'm crashing. No visitors yet, but it's only 9:30. I won't be needing the a/c today, and that will be easy on the budget and easy on the eardrums, too. The door is open and the cool air followed me into the Station.
____________
Once things started heating up, they got hot fast. Tattoo Man and Betty both arrived, followed by a parade of visitors, and who could blame folks for wanting to be out and about on such a perfect day. In fact, toward the end of the day, there was borderline pandemonium. There were 34 visitors altogether, and here's where they hailed from:
Wyandotte, Vinita, Grove OK, Fayetteville and Little Rock AR, Steamboat Springs CO, Seymour TX, Ozark and St. Louis MO, Chicago IL, Phoenix AZ, Dayton and Fairborne OH, and Lausanne, Switzerland. Chris, the fellow who works for David sometimes, came in with his wife and cute little 7-month-old son. 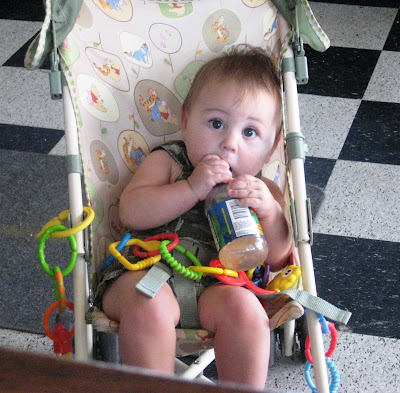 This awesome 1934 Pontiac was being driven across the country by a guy from Arizona. Here, some motorcycle guys from Little Rock are admiring it. 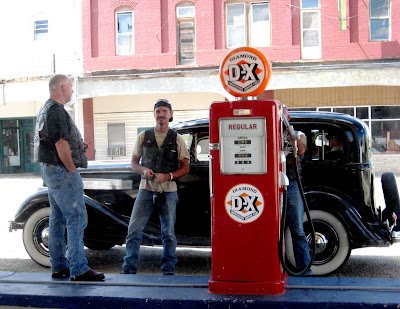 It was a truly great day. Back to Afton tomorrow, but for now.... dinner and sleep!
Posted by Laurel at 5:42 PM

Awesome day! I loved seeing the picture of the under-road tunnel in Chelsea. I've read things about how that was common in busy places along Route 66, that they would have tunnels under the road for pedestrians. I still can't wrap my mind around how busy the Road was in its day. Hugs, Beth

Sounds like you were invigorated, glad it was a nice day :o)

Is that flea market open? And are those little neon sculptures for sale? 'Cos I am SO hoping to find some neon to put in my classroom.

It's the Southern Belle Flea Market and it's still viable, although it's never open when I go past (very early in the a.m. and late in the afternoon), I'll see if I can find an Hours of Operation thingy on the door and let you know. Found a leg lamp in a catalog today and I'm ordering it tomorrow!

Too funny! I have taken almost the exact same picture inside my car in the car wash too!

Christa, Do you use the exact same car wash? Are you from Vinita? I love that car wash just because of the psychedelic soap!