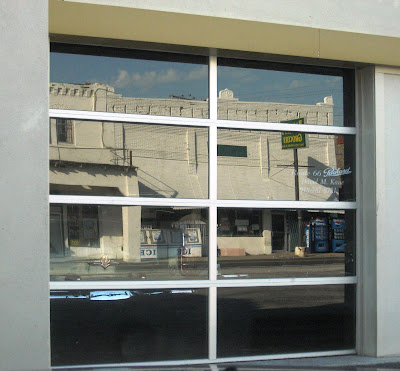 Just a few observations on a non-Afton Station day.

I've been hearing about chicken fried steak ever since I first came to Oklahoma, and although it always looked very good when others were eating it, I resolved to myself that I would never, ever, ever taste it since, let's face it, it's a heart attack on a plate. Here in Oklahoma, it's almost (if not actually) the Official State Food, revered by all. Over 10 years ago, when David and I were still together, Ron M. took us to one of the oldest, most historic and venerable restaurants in downtown Tulsa, called Nelson's Buffeteria (since 1929). On that occasion, David and Ron got their signature dish, chicken fried steak, but I got something much healthier and less exciting. Shortly after that visit, Nelson's closed it's doors, supposedly for good.
A month or so ago Nelson's reopened, at a different location, but with the same menu, same recipes, and many of the same, aging personnel. When I heard it was about to reopen, I decided that I wanted my first-ever taste of chicken fried steak to be from the famous Nelson's. Therefore, Ron and I decided to have lunch there today. Outside, we were greeted with the same old sign from the original location. 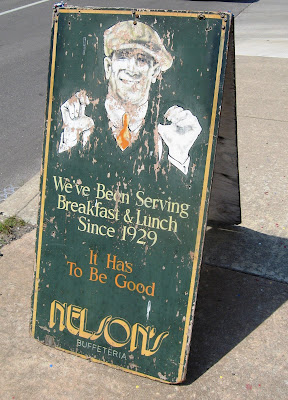 Inside, they have the same cafeteria line that they had in the old Nelson's, where there are only a couple of choices of fare (and an elderly server who looks as though he might cry if you don't order the chicken fried steak). Most everyone near us in line did just that, although today they were also serving a nice looking meatloaf. When it became my turn, I stepped up and proudly (in my best Oklahoma accent) said "I'll have the chicken fried steak!" Wow, I felt like a true Okie! And just to make sure I'd get the maximum empty calories, I chose macaroni and cheese and fried okra as my side dishes. (Most people get the mashed potatoes, but kidney patients can't eat potatoes.)
With great excitement, I sat down to my first, and probably last, chicken fried steak! 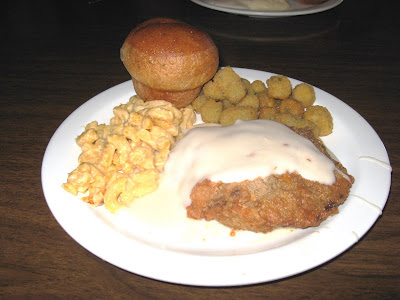 I have to admit I was a bit disappointed. It was good, but not good enough for me to have had an unrequited craving for it for 10 years! It was tender on the inside and crunchy on the outside, which I'm told is properly cooked. The gravy was ok. The mac and cheese was fine. The okra? What do people see in that stuff, anyway? I ate some of it, but not all. I couldn't finish the steak. Too much food! The whole wheat homemade roll was wonderful. The pies looked awesome, but we were both way too full for those. I'm so glad I went. It was great to eat in a famous old establishment, albeit in a different building. I think they'll stay open for a long time. The place was packed.
After lunch we drove to the west side of the river to have a look at the replica oil derrick that's just been completed on Southwest Blvd. (Route 66). It's to be the centerpiece of a Route 66 theme park to be built on the site, and was built with Vision 2025 and state Centennial funding. It's very, very tall! 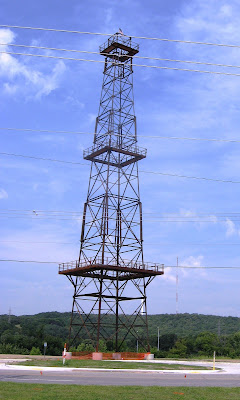 _______________________
Here's something else non-Afton Station related. Betty called my attention to an article in Monday's Joplin (MO) Globe about the Boots Drive-In on Route 66 in Carthage, MO. Since one of my favorite old postcards is from the Boots, I was interested in this bit of it's history. 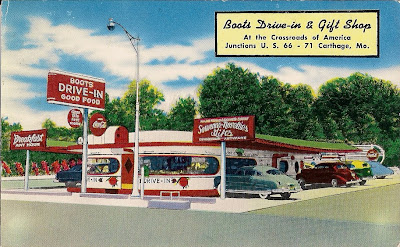 Excerpted from the article: Linette Gass said, "We all fondly remember the hours we spent buzzing around in circles and circles, hoping to see each other and everyone as we went around and around, or if we were lucky, we would actually find a parking spot. Many Friday and Saturday nights were spent there by the classes of the '50s and '60s. It was very sad when it was closed." Sharon Hill said, "It seems like yesterday. The road went right by Whistler's Hamburgers. Fun, fun, fun. Sometimes we spent a dollar." Lou Walker said, "Art and Betty Boots owned them (the drive-in and Boots Motel nearby) and they had several movie stars stay at the motel. I would like to have a dime for every time I drove around Boots as it was the hangout place for us teenagers."
As one of those '60s teen agers who drove around and around a drive-in in high school (in my case, Jerry's Drive-In in Lexington, KY) I have no trouble relating to this. It's a fun piece of Route 66 history. Boots Drive-In is long gone and there's a Credit Union in it's place.
Posted by Laurel at 2:15 PM

I think it would be better without the gravy :o)

I've never had a hankering for chicken fried steak. It's definitely a big deal in the Midwest, but URGH! So great that the place reopened, though!

I was going to ask...isn't there a Boots Motel, too? Then I saw it mentioned in the article. The motel is still standing, isn't it?

Our drive-in was Bonnie Doon's! Doesn't every town have one?

I agree with you about okra. I don't like that.

Ann's Chicken Fry House here in OKC serves a good chicken fried steak. Tattoo has it on him somewhere.

I can't believe you'd never had it before !!
I even was telling my doctor about it the other day... saying that I knew it was bad for me but it will be the first meal i order when i hit the states !!! I've tried to make it here - it was OK ... but not the same ... now my mouth is watering !!!