9:15 a.m. -- I've got a little problem this morning. Actually, right now it feels like a BIG problem although not so much for me as for the poor little bird who's now trapped inside Afton Station. When I opened the door this morning, he flew in with me - just a tiny little wren. Cute, if we weren't bent on terrorizing one another. He's on the windowsill in front of my desk, so I've moved my desk back, partly so as not to frighten him, and partly so that maybe he'll stop frightening me. To make matters worse for little Birdie, his friend is on the outside windowsill taunting him. I have no idea what I'm going to do about this situation other than hope that my next visitor is either an avian psychologist or a big guy who's not afraid of a 3-inch tall bird, as I am (Ok, I admit it!) By the way, as I write this, the bird has calmed down and stopped trying frantically to escape. Now we're just staring each other down. It's only 9:15 a.m.. This should be an interesting day. 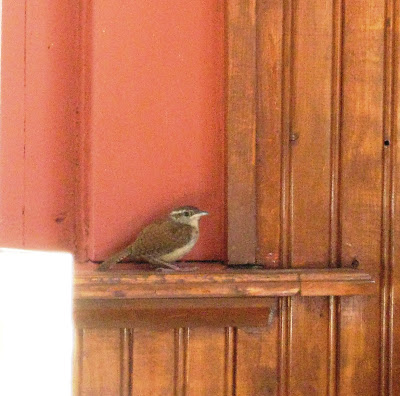 9:45 -- Somebody must be watching over birds and those who fear them. At 9:30, in walked the exact man I was hoping would show up. When I told him my dilemma, with absolutely no hesitation he walked to the sill, cupped Birdie in his hands, and marched him to the door and freedom. Crisis averted, with no lingering effects other than my feeling of being a huge wimp. The man and his lovely wife were headed for the Grand Canyon, so I gave them a guide book and wished them well. 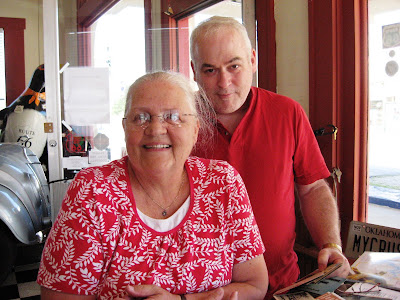 The Bird Man of Afton Station and his wife
_____________
10:00 a.m. -- The next visitors were a three-generation family of 10 from Ottawa, KS. , complete with a 6-month-old baby and a very very cute 2-year-old girl who was NOT happy to leave after spending some time with our gas station toy. I think I'm already tired. 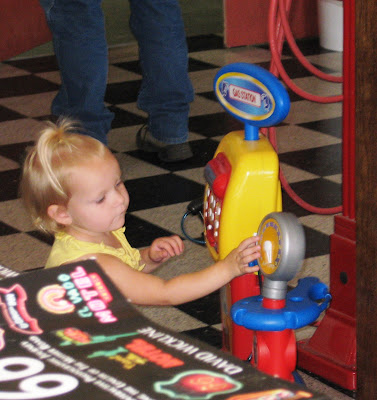 The rest of the day: General chaos! I've never had so many visitors when I've been there by myself. Betty dropped in for a while, which is always a joy and very helpful, but for the most part of the day I was alone. I had a total of 41 visitors, most toward the end of the day. Along with those mentioned before from W. Chicago IL and Ottawa KS, I also just about lost my voice chatting with folks from Miami OK, Joplin MO, Ft. Smith AR, Eunice NM, Pryor OK, Vinita OK, Afton OK, Chambersburg PA, Spartanburg SC, Thorp WI, Skiatook OK, Crawfordsville IA, Bartlesville OK, and Brussels, Belgium. I probably should apologize to any who felt they got short shrift, as despite trying to be all things to all people, I found it hard to meet, greet, and talk to everyone equally. They were all such interesting folks, too! Quite a few motorcyclists visited, and everyone was in a great mood on this beautiful, cool-ish day.
___________________
Here's one of the finished shields. Isn't it gorgeous? 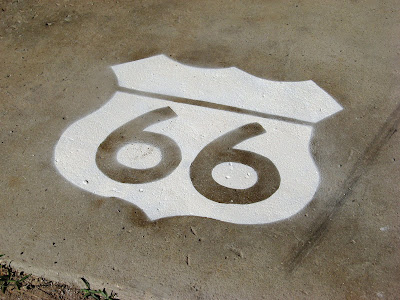 Buried cars a la Cadillac Ranch in Amarillo, seem to be popping up here and there. This one is on Route 66 near Chelsea. I've seen a few off Route 66, too. Interesting... I guess. 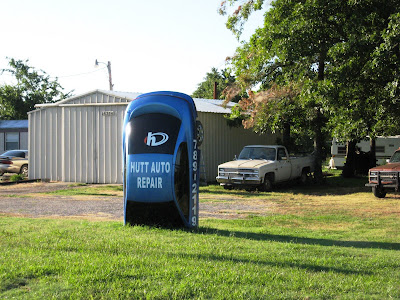 I'd like to see those painted 66 shields all over Oklahoma. Last year when I rode my Sportster I wanted to take a picture of it by one of those shields. I had to go to Kansas to do it.

I think the only thing you had to be scared of with that bird is, the mess it would leave.

We have pictures of both Shane and I standing in the road by a Route 66 shield. I'm can't remember where that was, but I think it was somewhere in Illinois. I love seeing the shield anywhere on the road or at various locations, and it's always a great photo op. Yours look great, and anything that contributes to a traveler's experience is a very good thing! Hugs, Beth

Glad the bird was saved without incident:o)