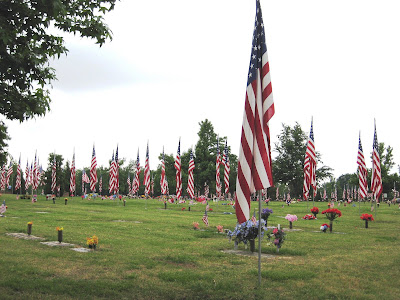 It's not much, I know, considering the importance of the day we set aside to honor those who have given their lives over the years, but my custom is to drive to a large cemetery in Tulsa (Floral Haven), where thousands and thousands of American flags fly for the entire weekend. One can drive the entire cemetery on paths lined with 2000 flags which have been donated by families of veterans and put in place by the Boy Scouts. After dialysis this morning, I made my pilgrimage to Floral Haven and was moved greatly, as usual. There were scads of people there, a long line of cars winding through in a solemn parade.
___________________________

It pains me greatly that I can't be at Afton Station today, because I'm sure it'll be a busy day there. I think David and Marly will be there finishing up the Citroen 2CV, so I trust they'll take time off to greet anyone who comes to the door. Sometimes they get so involved in their work that they entirely miss visitors. Ringing the doorbell will usually get their attention, however.
___________________________ 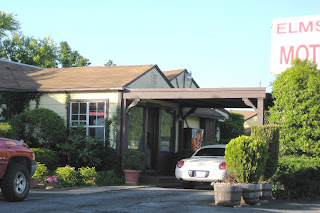 I have a huge obsession with motels. It stems from my youthful desire to be a motel owner, and all through my childhood I fantasized about having that coveted desk clerk job, my dream come true. In my older years, I've finally figured out that owning a small motel can be backbreaking work, especially if one can't afford a cleaning crew. Also, since I go to bed very early at night, staying up to check in late-arriving guests no longer holds any appeal for me. Nevertheless, the romance of motel ownership still wafts around my brain whenever I pass a little roadside place. I wrote this esssay for my website (www.PostcardsFromTheRoad.net) several years ago, and it will explain my obsession.

First, a confession. Back in the '50s, when other little girls were playing with dolls or teasing the daylights out of little boys, I was sitting at a small drawing board my father set up for me in our basement “rec room”, designing motels! When other kids dreamed of being firemen or housewives or veterinarians, I dreamed of nothing more than being a motel owner. Not many people knew about my smoldering desire, although occasionally my parents would show incredulous visitors the elaborate schematic drawings of tourist courts and motor inns I was cranking out on a daily basis.

How did this aberration occur to such an otherwise seemingly-normal grade school kid? I think it has to do with my intense love of the open road, a love which began at age four when my mom and dad took me on my first “road trip”. Being an only child, I never had to share anything with anyone, and that included the big back seat of our 1951 yellow and black Plymouth. That domain was mine alone, and from that vantage point I got my first taste of what it was like to be in a “different” place, to watch an unfamiliar world go by, and to help with grown-up selections such as a place for lunch or a motel for the night. I can truthfully say that even as a small child, I never experienced a single minute of boredom while cruising down an open road in an automobile. It is where I belong, and it continues to be where I am at my happiest. 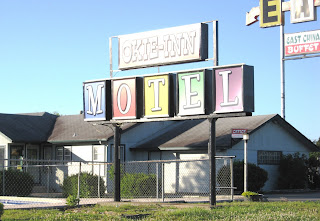 What a terrific read - I became addicted to motels at a young age myself, still today they seem like magical places. As to all those flags and what they REALLY represent, doesn't the irony get to you my friend? Come on over and see how I truly feel about this so-called holiday of the dead. The Mexicans do it up right, carrying skulls and death masks, we just cry about heroes and bravery and other stuff bs. Why not just stop agreeing to fight? Simplistic but why not.

I know Beth shares your love of old motels.

I do! And your wonderful essay brought back some great memories. Two of my favorite things about stopping at motels like that was Magic Fingers and those louvered glass windows. Those seemed to be especially popular in Florida, when not all motels had "refrigerated air." :)

What a great story!
I was never one to like travel much as a kid or even as an adult until the last few years seeing we got the Harley. Now I can't get enough of it.
Probably because we almost never traveled when I was a kid seeing I was one of nine kids and a twin at that. :)
I loved reading your desires, feelings, emotions, and loves. :)
Thanks Laurel for the wonderful posts,
Susie in northern NY

You're welcome, Suzie. I can't wait to meet you! Will you be traveling Route 66 on the motorcycle or in a car? As for your question on the eGroup about traveling east-to-west or west-to-east, I must say it's just easier starting in Chicago because all the guidebooks are oriented that way, but you see the same things going either way, so just GO! :-)

We will be traveling on the Harley and I think my husband may be thinking now of going East to West. :) We have almost a year to plan. :)
I hope you are open when we go through but if not that is just the way it is. :)
Thanks again for a great blog.
Susie

Hello everyone!
I would like to burn a theme at here. There is such a nicey, called HYIP, or High Yield Investment Program. It reminds of ponzy-like structure, but in rare cases one may happen to meet a company that really pays up to 2% daily not on invested money, but from real profits.

For several years , I make money with the help of these programs.
I'm with no money problems now, but there are heights that must be conquered . I make 2G daily, and my first investment was 500 dollars only.
Right now, I managed to catch a guaranteed variant to make a sharp rise . Turn to my blog to get additional info.

ok that's fine, i just made even more new emo backgrounds in my blog
http://www.emo-backgrounds.info

i have gone through this blog. nowadays im working from my home as a online businessman. and the above blog is really helpful.