Once again, the weather interfered with activities at Afton Station, but not too much this time. It rained all night, but today turned out to be quite nice, although apparently not nice enough for most of the drivers of the custom cars who had signed up for in Darryl Starbird's poker run. Of the 40-something cars which were entered, only five actually showed up. So, handing out playing cards to the entrants turned out to be the easy part of our day. There were lots of others out on the road, and in total we visited with 30 people today (maybe more... I lost count after a while.) Ron M., Tattoo Man Ron, and David were all there to help out, which was very nice. 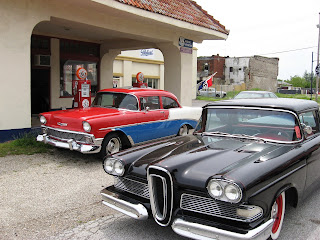 That red, white, and blue beauty is Tattoo Man's '56 Chevy. The other car is visiting. 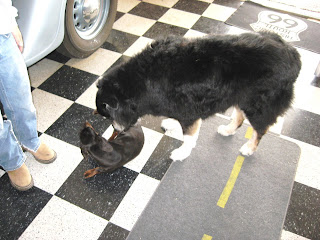 David's dog Black Jack made a new friend when some of the local Afton kids came in with their weenie dog!

Since we had several visitors come in just as we were closing, we got a late start coming home. Tomorrow I'll be going back early to meet Kara Dean, a new friend from the Route 66 Yahoo group who will be passing through in the morning. I look forward to meeting this young woman, who has done her homework before taking to the road.

Even though the poker run was kind of a bust, it still sounds like you had a really busy and good day!