One of "those" days

I can't really complain about the day at Afton Station, but it was one of those days that exhausted me, although I can't quite pinpoint the reason. It started out gently enough, with this beautiful sunrise. (Can you tell I love to photograph sunrises?) 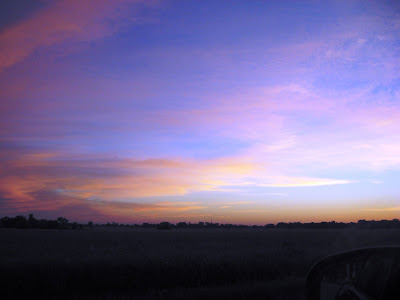 I had another lip smackin' breakfast at Clanton's and got to Afton around 9. David arrived shortly thereafter, both to put finishing touches on the 2CV and to meet with me about some business matters. He brought along our incorporation folder, which contained a set of insurance photos taken when we first bought the Station, before restoration. I'd forgotten what a horror the place was! Check these out. The first picture is of what is now David's work room. The other shows just one of many electrical nightmare areas. I'm surprised the place hadn't burned down long before we bought it. 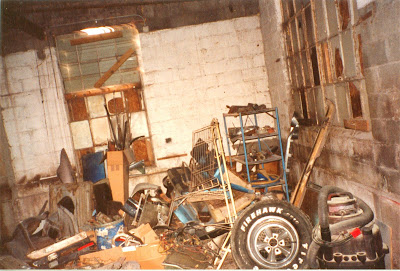 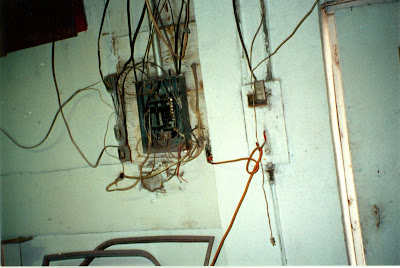 There are many similar pictures in the packet, but I'll spare you the ugliness. David and Marly worked all day, and the 2CV is really taking shape. The cream colored fenders on the red body are make it incredibly distinctive and pretty. The hood needs to be installed (obviously) and there are a few more touches, but it looks like David will have it finished in time to take it to the Greenwich (CT) Concours d'Elegance in early June. I'll be sure to get a full photo of it before it disappears. 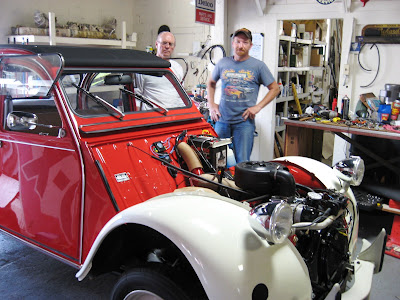 Visitors came in and out all day, 13 in all. They hailed from Paola KS, Northern CA, Chicago IL, Overland Park KS, Kokomo IN, and Ardmore OK, among others. There were a couple of highlights. These three guys from California (near San Diego, I think, but I forgot to make a note of it) are all over 70 years old and members of a traveling softball team! Yeah! They were extremely cool guys taking a partial Route 66 trip and apparently having a ball (no pun intended). They were the kind of people I hate to see walk out the door. They've played softball in the U.S. and several foreign countries. Obviously, they were in great shape, both mentally and physically. Go for it, boys! 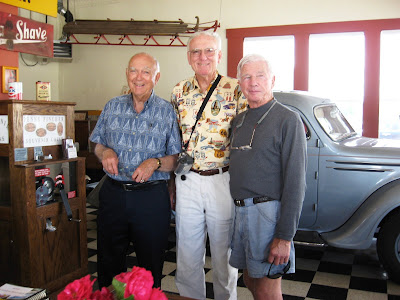 Shortly before I had to leave, and before David and I had been able to sit down and discuss the business stuff, a lady from Ardmore, OK came in. She was born and raised in Afton in the 40s, and was chock full of stories to tell. Oh, how I wanted to be able to pick her brain for a few hours! In just the 15 minutes we were able to talk, I learned so much. She said she might be able to come back in on Sunday for just a few minutes before heading for home, and I hope she does. I just know she's a wealth of information. However, talking about what Afton was, compared to what it is today, left her in tears. I must admit, I was sniffling right with her as she described the vitality and beauty of the "old" Afton. It's a crying shame what it's become.

Another sad note. Once again, a dog was killed in the road in front of the Station. This time, we didn't see it happen. It wasn't there one minute and then, simply, it was. Marly went out and moved it to the side of the road in the event that the owners wanted to find it. It had no identification. People drive too fast through Afton, and the townspeople allow their dogs to run unleashed all over town. It was inevitable and yet still sad.

On a much happier note, Marly brought a dozen of those INCREDIBLE donuts he gets in Miami. I managed to hold my consumption down to one, but David had three (unheard of, in our married days!) and Marly had the rest.

A visitor yesterday when I wasn't there was Mike Wallace from Ohio, an author and true roadie (but not to be confused with Michael Wallis from Tulsa). I've communicated with Mike previously via email. David said he was a most interesting guy, and I regret missing him.

Wow, those before pictures show what a great job you did :o)

Oh my goodness, the before pictures are amazing! What work that must have been.

I hope you get to talk more with the lady from Afton. I'm sure she'll be able to share a lot of information with you. Hugs, Beth

You should do a "Route 66 Lost and Found"-style slideshow with the before-and-after photos.

The sight of that breaker box sends chills through me. I work with electricity.

But, the building looks good now. You should be proud of yourself.
The Citreon looks good, too.

I've been working on a Lost and Found slide show for Afton for months. I think I'm up to about 30"befores" that can be matched up with photos I've taken recently. Thanks to Ron, who's going to put it all together, it should be ready soon.

Trevor,
We couldn't get that electrical mess fixed up fast enough! The picture you saw was just one of many wire snarls all over the Station. Scary!