(Another) Day at Afton Station

This would have been a MUCH better photo of the sun rising behind the Oasis Motel sign (on Tulsa Route 66) if a police car hadn't pulled up behind me when I was stopped in the passing lane, at which time I decided it would be easier to just move along than to explain what I was doing at 6 in the morning. Oh well. 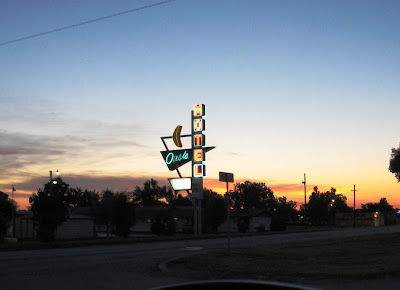 This was a day of "fits and starts", as my grandma used to say. I arrived at Afton Station at 8:15 a.m. and two motorcycles were right behind me. From then on, it was a matter of short periods of inactivity interspersed with bunches of travelers showing up at once. I think that in the end, the final count was 27. They came from Oologah, Grove, Stillwater, Blue Jacket, and Guthrie OK, Coffeyville and Wichita KS, Florence AL, Fayetteville AR, Branson MO, and Camarillo CA. Marly worked on the 2CV all day (it's nearly done), Tattoo Man came and stayed for a while, as did Betty. If it appears I'm hurrying, I am. I just got home after racing here on the Interstate, and Ron's due here for dinner (and to help hook up my new printer and webcam!) shortly.

My picture of the day is Afton itself. This is Main St. looking north from the railroad tracks. I took it because it's to be paired with one of my old postcards of same, which I'll post later. The difference is mind-boggling. 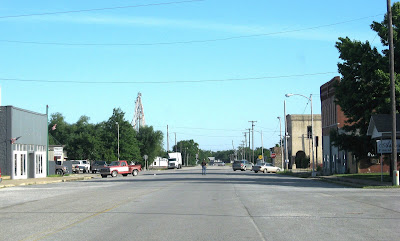