Model As and Terrapins 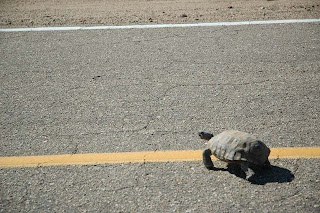 Apparently the word goes out to all Oklahoma terrapins that when Memorial Day weekend rolls around it's time to start crossing the road. I don't know why, but I suspect it has something to do with terrapin sex. At any rate, today's drive to Afton, rather than being highlighted by herds of longhorns, was instead an exercise in zig-zagging and fast course correction in order to avoid creating roadside turtle soup. I managed to avoid every one of them (dozens!) but I also saw plenty who had met their ultimate demise on the Mother Road. Dead terrapins seem to attract flocks of crows looking for a meal, so that approaching the squashed ones often caused a great cloud of flapping wings and the birds scurried out of the way.

Frankly, I don't know a terrapin from a turtle, but Ron M. tells me that the ones around here are terrapins. I guess I should stop now and hit Wikipedia. I'll be right back..... 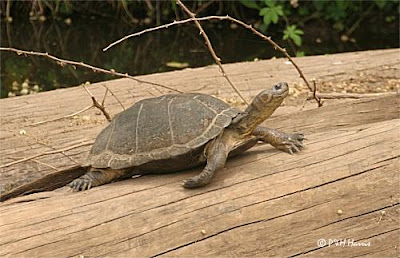 Well, my research was inconclusive and confusing. Looks like "terrapins" are only found in brackish water, and since we're nowhere near the sea, that doesn't sound right. I need to do a little more digging, but in the meantime, maybe you can figure it out at: http://en.wikipedia.org/wiki/Terrapin Any turtle/terrapin experts out there?
I was greeted at the door of the Station this morning at 9 a.m. by three motorcyclists, and it never stopped all day. Coincidentally, I had the same number of visitors today (72) as I had yesterday! I'm so tired of talking! Can you say "raspy throat"? The main event of the day was the visit by 21 Model A Fords from the Wichita "A" Club. They entered town in a beautiful long parade. Unfortunately, they didn't line up in our driveway like most car clubs do, but instead strung out all over the place making photography a little difficult. They would have looked great in a bunch. Marly was there to answer questions about restoration, and Tattoo Man and I handled the Route 66 questions. Car people are definitely friendly people. This group once again proved that theory. 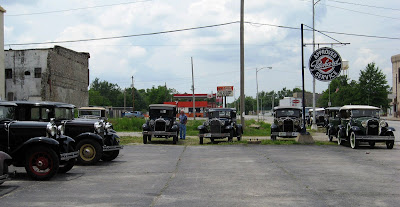 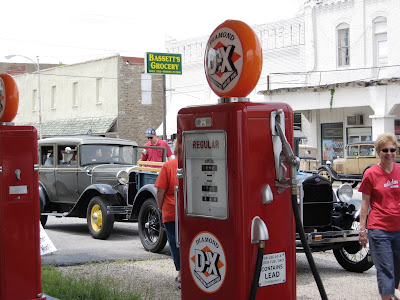 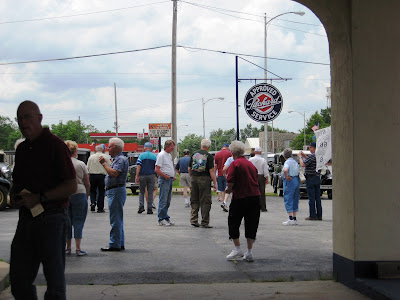 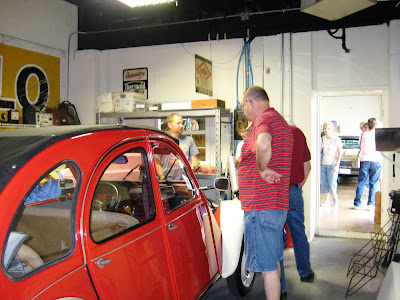 Marly justifying the innards of the Citroen 2CV to Ford guys.
There were 42 people in the Model A group. Other guests today came from Oklahoma City, Locust Grove, Pryor, Tulsa, Nowata, Langley, and Afton OK, Anaheim and Los Angeles CA, Portage IN, High Point MO, Lancaster PA, Chicago IL, Wichita KS, and Brussels, Belgium. We also had a visit from Rufus, a beautiful dog belonging to a guys from Los Angeles. He's traveling the whole Route, and seemed to be a pretty great traveling companion. It was pretty furious madness all day, but with the help of Marly and Tattoo, we did just fine.
Posted by Laurel at 5:38 PM

Those Model A's parked in front of your gas pumps would make a terrific picture.

The picture of the one crossing the road reminds me of that chapter in "Grapes of Wrath" about the turtle crossing Route 66.