I've been working on the Afton Before & After slide show for a few hours and need a break. So, here are a couple more photos I took yesterday on the way to Afton Station. They're not good pictures, but they fulfill my promise of adding something different from along Route 66 to the blog each day.
Between Chelsea and Vinita there's a place called the Little Tin Barn. An exact description eludes me, but I guess it could best be described as a large roadside lot filled with "stuff", mostly old and new yard art. There's some pretty neat stuff there, and it's all for sale. I recommend a visit by anyone passing that way. Later, I'll try to get a shot of the whole thing, but for now, here is the entrance gate. I do love those tin cowboy cutouts! 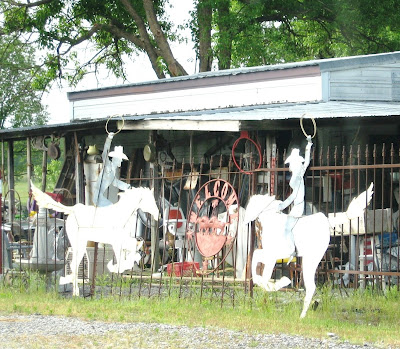 Near Foyil, there's a little privately-owned convenience store called Kong's Korners. This rather bedraggled and weathered gorilla stands out front. He's about 6 feet tall, and I have no idea why the place is named what it is. Just another of the mysteries of Route 66. 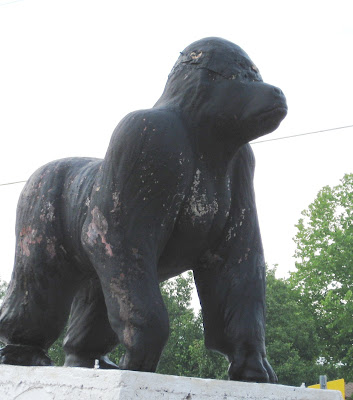 Hi Laurel, Wasn't King Kong a gorillia in a movie. Wasn't he the gorilla that climbed the Empire State Building. I am not sure, but maybe that is the reference to Kongs Korners.

Bill,
Yes, I'm sure it's a reference to the King Kong story and movie, but what does it have to do with Route 66 in Eastern Oklahoma??

Whatever the reason for the name Kong's Korner, it got your attention, which is what any business owner wants.
Original Route 66 business owners competed to see who could come up with the most outrageous neon signs, trying to attract attention and, thus, business.