... so I'll say it in an abbreviated form, I guess. It was a fine day at Afton Station today. For one thing, the sun shone for most of the day, which is a real rarity around here lately. I took another windshield photo on the road this a.m., even after promising I wouldn't. I just wanted a shot of the sunrise, since the elusive sun was actually considering making an appearance, despite the heavy cloud cover. 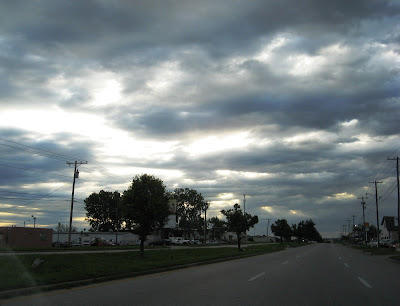 Then, I took a little jog onto the University of Tulsa campus, since it's on Route 66 and I've never taken any pictures of it before. It's quite a pretty campus, but I had trouble finding a good angle for a picture. 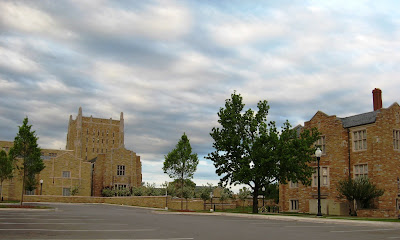 At last, I made my way to Afton, and found Tattoo Man already there when I arrived, both of us being a full hour early again. We were rewarded with a great parade of 14 visitors, well-spaced so we had time to chat with everyone. Visitors included folks from Baltimore MD, New Orleans LA, and plenty of locals. Betty brought in her houseguests from McPherson KS and we enjoyed meeting them and hearing his stories of driving Route 66 in the early 1940s. My friend Jacson from Brazil was back in town and paid another visit. He was able to stay quite a while. He's flying out tomorrow on business to Kansas City and Lakeland, FL then back to Brazil. He'll be back to Afton in July, however. At the end of the day, the fellow who sold me the pink 1957 Herter Flying Fish boat came in wanting to buy the old Mercury motor in our back yard. I had to remind him that he was the one who sold it to me! It was pretty funny. We had a nice chat.

When Ron was showing the tattoos on his back to Betty's friends, Betty couldn't resist poking him in the ribs to make him jump. I caught this photo of the hijinks (LOL). Betty's friend in the background seems quite amused. 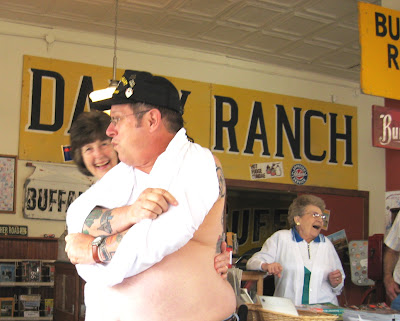 Too funny that the guy wanted to buy the motor he sold to you! Glad it was a good day at Afton!

A Blessed Mother's Day to you Laurel.