Once again, there was nothing boring about today at Afton Station. It was quite busy, with 35 visitors coming from Salina and Owasso OK, Columbus OH, Kansas City MO, Betholta IL, Dallas TX, Hutchinson KS, Elizabethtown KY, Fort Smith AR and Essen, Germany, among others.

An early-arriving anticipated guest was Mike Wallace (not to be mistaken for Michael Wallis, the author) who was making his second visit to Afton Station on his Route 66 trip. He had stopped by on his way out west (from Ohio) but since I wasn't there, he came back on his way east. Mike is riding a Harley and has had a super time along the way. He's got to be the most prolific photographer since David Wickline! He brought in his laptop and I started looking at his pictures. After nearly an hour it was time for him to leave and I hadn't made it past Illinois! Great pictures of everything! I encouraged him to make a slide show and post it, so I hope he does. I liked Mike -- a very interesting guy. 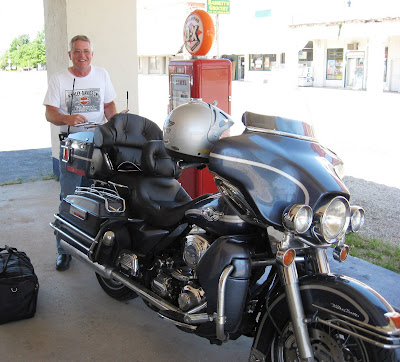 Later, my friends Brad and LaSandra from Tulsa and Marilyn and Doug from Chandler (OK) arrived and stayed for the rest of the day. With that, it became party time! They're such fun people, so there were plenty of laughs. They arrived with bundles of hot-off-the-presses 2009 editions of the OK Route 66 Trip Guide, so I'm the first to have them to distribute. I broke out the strawberry/blueberry shortcake and whipped cream and we all indulged. No, I rarely (ok, never) have goodies like that at the Station, but since I forgot to serve it for dessert last night (old age, y'know) I brought it along today and there was enough for all. Betty and Ron M. were there to add to the fun. And all this was happening with travelers coming in the door every few minutes. Not sure what they may have thought about the whole thing, but nobody complained about the chaos, least of all ME! Oh, also David and Marly were there scrubbing down David's 44-foot long motorhome in the driveway, so that added to the general craziness.

Have I told you lately how much I love what I do?? This was such a great day!

Now I must confess that I've already broken the promise to myself to take an interesting photo of something on Route 66 every day. Instead I'll post one I took a few days ago and didn't really feel it was good enough to put up here -- that is, not until today when I realized I didn't have anything else. :-) It's the Blue Whale in Catoosa, taken from the car because it was raining too hard to get out. It's not the most favorable angle on the ol' boy, but it was the best I could do with what I had. 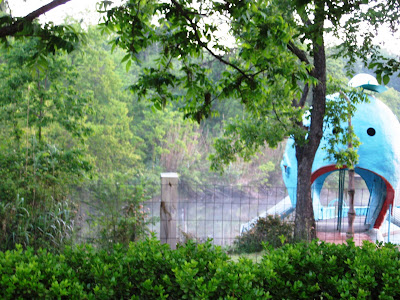 As you probably remember... the Blue Whale is my very, very favorite Route 66 attraction... and the first time I saw it in person it was pouring rain!

My brother and his wife were living in Tulsa at the time. We attended church in Vinita (my sister-in-laws cousin was the pastor)and afterward they indulged me by driving all over that part of Oklahoma so I could visit the sites I had only read, heard, and taught about.

They stayed in the car and I, in my Sunday best (heels and all!), got soaked exploring my Blue Whale. The pictures I took are much more bleary looking than yours, but they are my all time favorite photos of any place on our beloved road.

Thank you for bringing back a most wonderful memory.

(Now you know why you posted that picture today!)

PS: And yes, you do have the best job ever!

Becky, so nice to hear from you! I love the Blue Whale, too. Even though I pass it 8 times a week, I never get tired of it. Funny you should agree that I have the best job ever, since until I got Afton Station, I always thought YOU had the best job ever! How are things going at the Big Texan?? Keep in touch.

I love the Blue Whale, and it's one of the things that I'm most looking forward to seeing! I'm so glad he's still hanging in there! Sounds like a great day at Afton, but it's hard to go wrong when strawberry shortcake is involved. :)