I remember how people used to tell me "It's the people that make Route 66 exciting and wondrous". And I'd think to myself that it was just another trite phrase, like "I'm a people person". Yeah, I'd say, but really it's the nostalgia, the architecture, the old diners and motels that interest me the most. Well, all those trite, silly people were RIGHT. I was wrong. So wrong. Having a business on Route 66 has taught me that, and continues to teach me that every day.

I was thinking today about how moved I've been, and how my life has changed, by meeting the PEOPLE of Route 66. There are so many of them, and I'm probably making a big mistake by listing any of them by name here, but I just started jotting down names until I had to stop when my first guests came in. (Disclaimer: If your name isn't here, don't be insulted. There are many more, I assure you.) There's Ron and Ron and Ron and Ron (I know a lot of Rons!) and Betty and Mike and Lulu and Brad and LaSandra and Marilyn and Melba and Jim and Jim and Shellee and Kathy and McJerry and Jeff and Denny and Steve and Croc and Becky and Jacson and Mark and Emily and Pat and Jennifer and David and David and Jane and Blaine and Michael and Suzanne and Carolyn and Linda and Julie and Larry and Peter and Carol and Trevor and Trudy and Frank and Ramona and Dean and Scott ... and Mary Lou, Lucille, and Fran (may all three rest in peace) and Kathryn and Jeanne and Cole and Kara and Joe.... and I could go on and on. These are just a few of the awesome collection of friends I've made from all parts of the world through my Route 66 connections, and there are so many more I've not yet met in person but hope to meet very soon.
Kara and Joe are my newest friends. After they visited Afton Station on Sunday, we went out to dinner together in Tulsa that evening. What an incredibly charming young couple. I had a wonderful time (and a pretty remarkable Cuban Sandwich, too!).
Another wonderous thing happened today, which is probably the catalyst for my rhapsodizing about Route 66 people today. I received a snail mail note from some people who visited Afton Station a few weeks ago. It was a nice thank you note, but the best part was that they had made the stationery, which included a picture of the modern Afton Station on the front, and a pic of the 1948 Station on the back. I was moved by the time and effort they put into this creation, and if they happen to be reading this post.... thank YOU, David and Karen. You rock!
A lengthy and very good article about Afton Station has been published in the University of Kentucky Alumni Magazine. It's online, but only accessible there to U.K. grads. When I get my hard copy in the mail, I'll scan it and put it here. I'm thrilled by the article, particularly the care taken with accuracy . Of course, I'm also quite flattered that the article even exists.
My visitors today were true roadies. There were 14 in all, not including Betty, who came bearing the most sweet-smelling roses. The whole Station was infused with their wonderful scent, which was a welcome treat in this ordinarily musty old place. 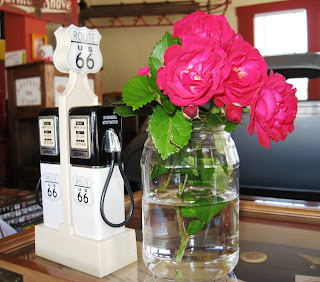 Visitors were a couple from North East, MD on their 50th anniversary Route 66 trip, a trucker from Hancock, WI who finally got time to come in after making several passes here in the past, and a guy from Denver, CO on a very cool trike with an equally cool trailer (Picture below... eat your heart out, Tattoo Man!). The gentleman travels continually with no particular destination and buys antiques along the way.

Additional visitors included a couple from Marion IN, some friends of Betty's from right down the road, two extremely handsome young men from near London, England (I should have taken their picture, but I was too smitten
Oh, I forgot.... while at breakfast in Claremore this morning, a huge gleaming new bus pulled in and across the whole side was "UNITED STATES OF AMERICA". As you can imagine, there was much buzz about what it might be or who it might contain. Several very well-dressed people came in and went straight to a back room. Was it a high government official? If so, why a bus? Buzz... buzz... buzz... 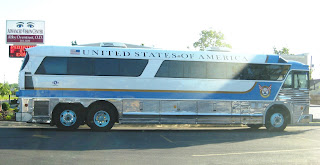 So, when I left, I drove up close to it, so I could read the writing on the very official-looking shield. Oh well..... 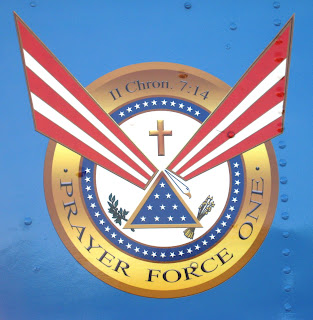 That bus was a cruel hoax, but between it and your Englishmen, I feel I must direct your attention to Article IV, Section 17, line 12 of the S.F. Code of Conduct: "In the unlikely event that Barack Obama wanders into Afton Station, Emily must be provided with photographic evidence of this occurrence, preferably in the form of a high-res image and/or poster-sized print of POTUS leaning against a Packard like a GQ model."

And try to catch him looking at least this hot. :)

Buildings are interesting, true. We all like good Art Deco architecture.
But, it's the PEOPLE who make it really interesting.

I agree with you.

I'll look forward to the article! LOL at Hippie's comment!