After hundreds, maybe thousands, of hours sitting at my desk at Afton Station looking out the window at the remains of the Palmer Hotel and wondering what the almost totally faded letters across the front spelled, today the letters seemed to emerge -- MODERN ROOMS. Actually, I had figured out the ROOMS long ago, but the word preceding it had eluded me for years. Today, it seemed to emerge, probably from the extreme dampness in the air, and I see that it says MODERN. (Can you see it in the picture? Maybe not. ) Hmm... modern rooms? They're anything but modern now!


Betty came for a visit and said she had to take several detours past flooded roads in order to get to Afton from her home in Miami. It continued to rain steadily all day, and now that I'm back in Tulsa it looks like an end might be in sight. There was no over-the-road flooding on my trips either to and from Afton. Ron M. called from his vacation in Arizona to report that they're having great weather out there. Figures! He's having fun following the Arizona Fun Run, a huge car show/cruise that goes from Seligman to Kingman, and now he's off to Oatman to pet the donkeys.


I had 10 visitors today, from Stuttgart Germany, Dayton OH, Madrid Spain, North Baltimore OH, and Vinita and Ponca City, OK. The two fellows from Madrid were on motorcycles, doing the Route from Tulsa to Chicago and planning to do the western half next year. They were pretty cold and wet. The husband and wife from Dayton, OH are celebrating their 25th anniversary by taking a Route 66 trip to the Grand Canyon. In honor of their anniversary, I took their picture in front of Trudy Jugler's mother's quilt. 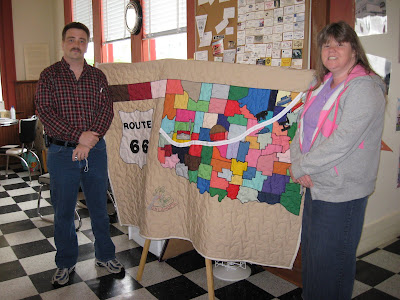 Ok, how about a little spring coming back to Oklahoma this week???
Posted by Laurel at 5:12 PM

Wow 10 visitors? I couldn't handle it lol. I'm trying hard to see "Modern Rooms" but all I get is "dog" at the end, time for new glasses maybe? Your word verif is funny, it's "souper" LOL.

This is great to see. I love to come across a blog from a business on Route 66. I hope that the internet has increased the number of visitors and internet.