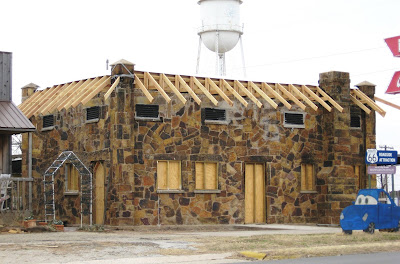 After reading Ron Warnick's blog report on the progress of rebuilding the Rock Cafe in Stroud Route 66 News, I decided to take a ride west on Route 66 this morning to check it out for myself. Just my luck, there was nobody around whatsoever, so all I got were some photos of the exterior. It's great to see such significant progress, however. For those that need a touch-up, the Rock burned in May of last year. We all knew that owner Dawn Welch wouldn't stand for such nonsense, and she set about almost immediately to reconstruct the Route 66 icon. 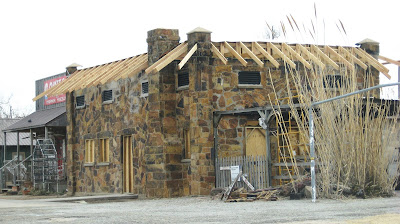 In Stroud, I also stopped to snap a pic of a very snazzy retro motel sign. The best part is that the motel that goes with the sign is still open and in business as a motel! 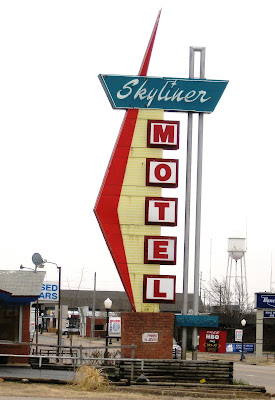 I continued west to Davenport and then turned around and headed home. In Sapulpa, I got on New Sapulpa Road, which is a newer alignment of Route 66, in order to get home faster. I stopped to take a picture of a sign I've always admired. The roller rink belonging to the sign is no longer in operation, but I do love the giant flying roller skate. 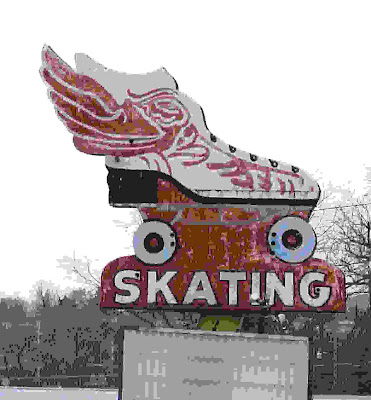 Laurel, how about, when the Rock Cafe is finished, we agree on a date to meet and have dinner there?

I love for you to meet my wife, Lim, and two future Roadies, Hunter and Heather.

I read Ron's entry about the Rock Cafe. How great to see that it is being fully restored, and it sounds like it will be able to accommodate more people. Wonderful!

Most excellent Googie signage, Laurel. The Skyliner Motel is a beaut!

Had to click through because I knew Beth would have commented :o)

Love your site, especially the pictures.