"Not the best, but good enough"

My first visitors were waiting when I arrived at Afton Station, a half hour early. The penetrating cold wind practically blew us away while I unlocked the door. The couple, even though they were from frigid Wisconsin, were shivering. A half hour after they left, however, the temp had already risen to 50 degrees, although the wind remained relentless all day. After it blew over twice, I gave up on putting out the big sign.

The Wisconsin folks had driven Route 66 from OKC to Afton, and they remarked that there weren't any decent mom 'n pop motels along that segment. I was able to recommend several, but of course by then it was too late. They ended up staying last night at the Holiday Inn in Vinita, just minutes away from the wonderful Chelsea Motor Inn, one of the best mom 'n pops around. If they'd only known. (I noticed when I looked at the guest book that David had hosted people from Wisconsin yesterday, too.) We've had a lot of Wisconsin visitors lately.

A mother and little boy (first grade) from Tacoma, WA were next to come through the door. They were on a "pressed penny scavenger hunt", and were following the list on http://www.pennycollector.com/ to find them across the country. What a great geography lesson for little ones!

A lovely couple from Stittville, NY arrived, interested in finding out more about the grocery store for sale across the street. As we were talking about it (and I was doing my customary sales pitch!), who should walk in but Tommy, the owner. This is great, I thought. I was already imagining that building becoming a gigantic flea market, which is what the NY folks had in mind, and which would surely bring tourists to Afton. However, for some reason Tommy showed no particular interest in pitching it to the couple. I didn't feel it was my place to jump into the conversation at that point, but I sure didn't get why Tommy, who supposedly is eager to sell, wasn't showing any enthusiasm with these people who seemed to be serious buyers. After everyone had left, it occurred to me that perhaps Tommy isn't quite ready to see his 87-year-old family business slip from his hands.

Betty came and brought another Afton School Annual, this one from 1948. Although there were no pictures of businesses to add to my collection, there were text ads, some of them very interesting. For example, there was an ad for the Ritz Theater, "Home of Better Pictures", the first evidence I've run across that Afton really DID have a movie theater once. Some of the other businesses had some amusing slogans:

City Barber Shop: "Not the best, but good enough". Hey, at least they're honest.
Matlock Insurance: "We pay you for ashes and sell dirt cheap". Huh?
Palmer Hotel: "Where all the big bugs hang out". More honesty? Ewww...
Farmer's State Bank: "Assets over $1,000,000". That was probably a lot... then!

One more thing.... On the Activities page, it was noted that, for Senior Activities Day, the class visited a rubber plant. Boy, those kids knew how to party!

I bought a boat -- a 1957 Herter Flying Fish -- several years ago, and like so many of our Afton Station "projects", it still hasn't been fully restored. We painted it it's original colors, pink and black, but never got around to polishing the metal trim pieces, so it sits in a corner in our workroom, usually covered by "stuff". I've been dying to be able to take a picture of it, and today I took some time to do that, but as you can see, it's still peeking out from behind the more recent resto projects. Here are the pics anyway. Note the awesome tailfins, which will look even better when the taillights, resembling '57 Chevy taillights, are installed. One day I hope to show you the whole, unobstructed thing. 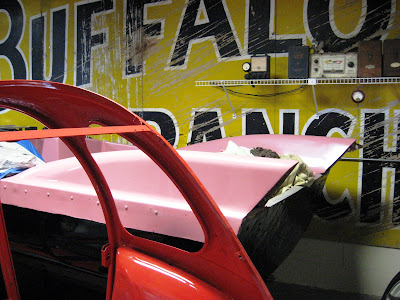 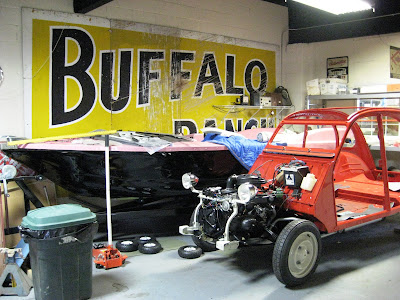 On my way home from Afton, I snapped a picture of the iconic Chelsea Motel sign. It was once a very small motel, now a tumbledown building that might be a private residence, but I'm not sure. But the sign has always been a favorite of mine. 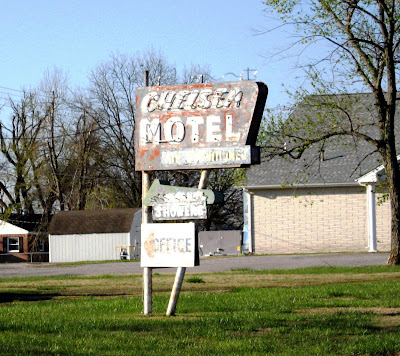 Sounds like an excellent day at Afton! I agree...kind of surprising that Tommy wasn't more enthusiastic about talking to that couple. You might be right...is he just not ready?

I loved the business slogans. There must be some meaning there that has been lost through the years.

Cool boat! Is that gonna be displayed in your museum?

I see you're still working on the Citroen 2CV.