Thanks to all of YOU, I registered my 10,000th blog hit while I was at Afton Station today! I really appreciate all of my regular readers, as well as those who just visit occasionally. I'll continue to try not to bore you to death.

As for today, I was supposed to meet my financial guy from Maryland at Afton Station for a brief meeting, as he was in Oklahoma for just one day. Meanwhile, Ron was with me today, and our mutual friend Joe asked if he could tag along today, too. I was very excited about Joe wanting to spend the day at Afton Station, and had hoped to impress him with a busy day. We had only greeted 5 visitors by 1 p.m., when the financial guy called and, said that due to a flight mix-up, he was going to be quite late getting in. So, I closed up the Station early and we drove toward Tulsa, with the intention of meeting him somewhere half way between the Tulsa airport and the Station. No telling how many visitors I may have missed by closing two hours early, but it really was the best plan, since I didn't want to miss the guy who was going to tell me how all my holdings had multiplied in value since last year. HA HA, VERY BIG JOKE! :-) I ended up meeting him at the McDonalds in Catoosa right next to the huge casino there. Joe and Ron spent 45 minutes at the casino while financial guy and I had our meeting at a table at Mickey D's. Usually when he comes to town he takes me out for sushi, but (sob!) that just wasn't possible this time. (However, the financial news was better than I expected, so I'm breathing a sigh of relief.)
Betty stopped in after church and she and Joe enjoyed chatting. Both are history buffs so they had a lot of local history to discuss. 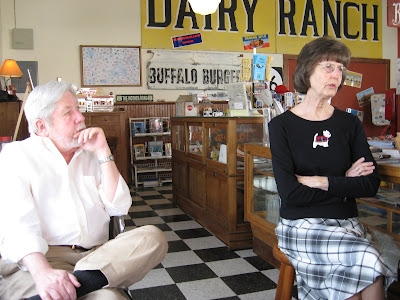 Like yesterday, one couple who visited the Station today was very young and very enthusiastic. They were from Texas, heading toward Grinnell IA, and were a cute sort of hippie couple whom I can imagine would have a great time if they decide to "do" Route 66 some day -- and I think they will.
Another couple was on their honeymoon! They just got married on Friday and were taking a quick two-day jaunt to celebrate before needing to go back to work tomorrow. Our other visitor was a single lady from Michigan who is taking Route 66 as far as Arizona, where she'll meet a friend and they'll continue together to the coast.
So, after all the craziness, and after dropping Ron and Joe off at their homes, I still got home earlier than usual today, but with great apologies to any folks who may have arrived late in the afternoon and found us closed.

Sounds like a good day, and hey, you gotta do what you gotta do. I'm glad your financial news was better than you expected. Don't often get to hear that these days, do we? Urgh.