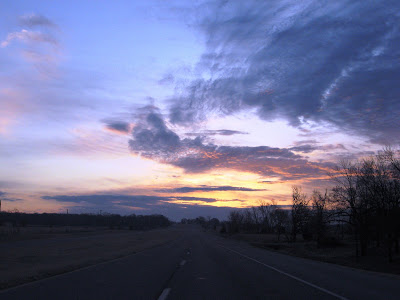 Sunrise on 66 this morning

I stopped for breakfast at Clanton's in Vinita this morning on the way to Afton Station and was surprised when Tattoo Man Ron Jones tapped me on the shoulder and asked if he could join me. Of course! I guess we had a simultaneous hankering for Clanton's awesome breakfast.

The morning at Afton Station sure wasn't as satisfying as breakfast. On the contrary, Tattoo and I sat around all morning with the only guests being one young Afton couple who wandered in and stayed for a very brief time. The town was dead (but then, what else is new?). The grocery store is closed, but there's a new sign in the window upping the discounts from 10% to 20% in Tommy's attempt to get it cleared out. I looked in the window. There's not much left in there. Tattoo eventually got bored and went home around noon.

I closed out the February books. That took about 10 minutes. LOL! We only had 94 visitors for the month, averaging about 6.26 visitors for each of the 15 days we were open. Worse yet, we only averaged sales of about $9.25 per each of those days. Good thing we're not depending on Afton Station for our income! That doesn't even cover the phone bill, much less the astronomical winter heating bill, the electric bill, the cost of fuel for my 180-mile round trip, etc., etc.

Later in the afternoon, business started to pick up, and I ended up greeting a total of 13 visitors today. I was encouraged by the relative youth of most of the travelers today. Route 66 can use all the young faces it can get, since most travelers seem to be on the older side. But today, we had a young family of four from Austin TX, three relatively young fellows from Des Moines IA who were delivering some furniture to their mother in a nearby town, another young couple from Jay OK, an older car guy from Broken Arrow OK who went nuts over the cars (I like that!), and one other guy who just stopped by to remind me that his car club is stopping by next Saturday. Sounds like there are going to be a lot of cars, so I'm psyched about that.

On the way home, I had decided to stop at Clanton's and snap a picture for this blog, but I was stopped in my tracks by bulldozers and hardworking guys right in front, looking like they were tearing up the place. Turns out they are just excavating to put in some sewer pipe (much needed in Vinita, where the streets flood at the first drop of precipitation), but at first glance it looked like one of my favorite restaurants was succumbing to the bulldozer. 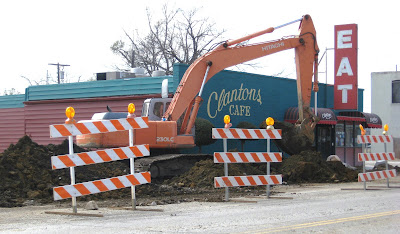 All in all, it was a pretty good day at the Station, and having 13 visitors in March ain't bad!
Posted by Laurel at 6:44 PM

Glad that you had some visitors today, the low numbers could certainly be depressing if you were looking for the income.

Whew, I bet that was a scary sight, coming up to the cafe and seeing heavy equipment!

Sounds like now that the weather is getting nicer, things are going to start picking up. How exciting!