Don't mess with a good thing.

Ok, I have to start by saying that today's weather is lousy! Well, perhaps it's not lousy by some people's standards, but people who know me are aware that I hate snow more than Bristol hates Levi, so I've decided to spend most of the morning at home. That's a rarity for me. It's not even noon yet and I'm itching to go somewhere, but since a few tiny snowflakes are still floating through the cold, gray sky, and since I have something on the stove, I guess I'll stay put for a while. I did run errands this morning early.... breakfast at Jimmy's Egg, a trip to the bank, the bakery, and the gas station ... but then I came home and had a brilliant idea. This is where "Don't mess with a good thing" comes in. Since I'm having guests for my annual Irish dinner tomorrow night (a bit early this year, due to scheduling), and since I'm a huge fan of the incredible "Pioneer Woman" blog The Pioneer Woman Cooks - Ree Drummond, in which Ree spectacularly photographs every single step in the creation of her family dinners each night, I decided that if she can do it, so can I. Welllllll...... yes, I can take pictures of food, but they're not gorgeous like Ree Drummonds, not to mention the fact that I got bored with snapping pictures about half way through the operation. LOL! At any rate, here's my poor impersonation of the Pioneer Woman.

I'm cooking a day early because I won't be home tomorrow, and also because my Irish Dinner of Corned Beef and Cabbage always tastes better the second day. It's a menu I've cooked without failures every St. Pat's season since I was first married. It's also as easy as pie (actually, a lot easier than pie!), pretty cheap to produce, makes the house smell gloriously garlicky, and tastes like Heaven in Dublin.
I was thinking of using the crockpot this year, but it's not big enough, so I went back to the two-part pasta pot on top of the stove. With the basket in, at the end of cooking it's easy to lift all the food out in one mighty heft. 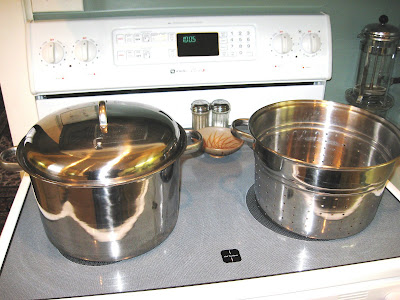 I bought two briskets this year, even though there will only be three of us at dinner. For one thing, they shrink miserably. Secondly, leftovers are awesome! I try to buy lean briskets, but not TOO lean. That's probably the hardest part of the whole procedure. This year I was lucky. One is very lean and one has a little too much fat, but it's not at critical mass. The fat is needed for flavor. I bought pre-corned briskets this year, which eliminates the several-days-long step of brining the meat. The ones I bought this year came with little packets of spices. I use about half of them, since I like to add my own garlic and bay leaves. The other spices in the packs are mustard seed, thyme and peppercorns. 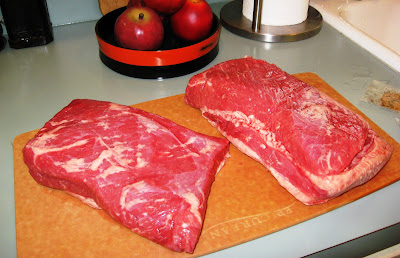 The ingredients I use are: garlic (a lot!), salt and pepper, more bay leaves, baby carrots, little red potatoes, and of course, cabbage. 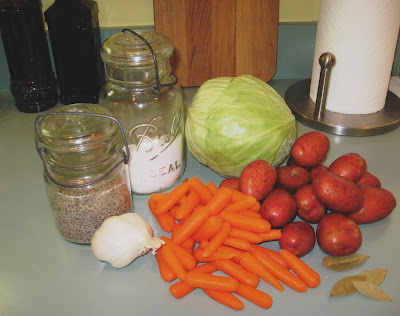 I'll take a picture of it tomorrow when it's ready to be served. Taking pictures while cooking is a huge pain in the neck for a lazy bum like me. :-)
I apologize for this decidedly NOT Afton Station-related blog entry. But hey... Happy St. Patrick's Day... next Tuesday!
Posted by Laurel at 11:43 AM

I just discovered the Pioneer Woman because I'm a big fan of Bakerella's blog, and she has been spending a few days with Pioneer Woman. I even went out and purchased the same camera that Bakerella uses thinking that maybe I will start to photograph my creations as well. Hasn't happened yet, but the new camera will definitely come in handy for my Route 66 trip this year. Now...if only I knew how to use it...

Did you enter the Pioneer Woman's last contest? Since I live relatively close to her, I wanted to win the chance to watch Bakerella's demo. I didn't win, of course.

It's great that you have a new camera for your upcoming trip. I hope I get to see it!

I almost bought some cabbage today, but I'm afraid Ken isn't a big fan. I might have to make a crockpot thing soon though...it's like cabbage rolls without the rolling, and I love it. He's a good sport, and will eat it. I just give myself lots more cabbage!

No, I didn't enter the contest because I'm in Iowa and it would have been too far to travel. I would have loved to have been a part of it though!