Well, exciting to me! Actually, most of today at Afton Station was pretty exciting. There were only 7 visitors, but they were good ones. The day started with a very cool couple from Kansas who had three free days and chose to use them on Route 66. They were heading west, so I sent them to Clanton's (of course!) for lunch. Then, to my great delight, an old friend from our National Packard Club days arrived unexpectedly. It's always so much fun to look up and see a familiar face, especially one I haven't seen for years and years. He and a friend were hauling a car from St. Louis to Norman, Oklahoma. We had purchased our '34 Packard 12-cylinder from him years ago, and I think mostly he came to say hello to his old car. Here it is:

Betty arrived and brought me a treasure trove of photos of Afton, in the form of the 1965 school yearbook!!! The advertising section has a number of photos that helped me identify stores that no longer exist in the town. We went through the book page-by-page and she pointed out the childhood pictures of people I've met recently, in their older years. What fun!!!
Here's Betty herself... when she owned and operated Dairy Ranch. She was a cutie... and she still is! 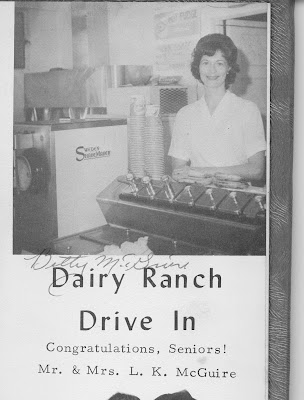 And here's Afton Station in '65, when it was called Eagle Service Station. That's Mr. Marion Lee Baker, the owner, and his son. And look! They had a phone booth! 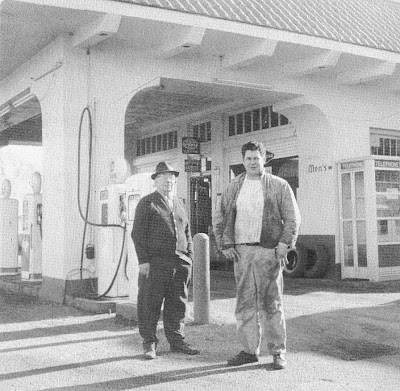 The day ended with a visit from Jordan, Joey, and Maggie, three really sweet 7th graders (on spring break) from Afton Middle School. They stayed for a long time, and I had forgotten how bright and polite some middle schoolers can be. I gave them each two quarters and a penny so they could use the penny squashing machine, and you would have thought I'd given them hundred dollar bills. I hope they come back often. 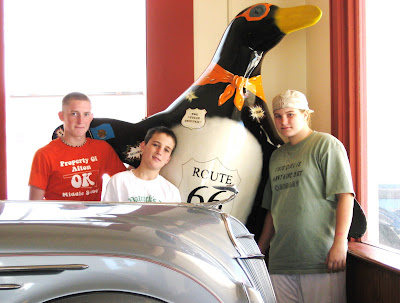 I woke up this morning sort of dreading the new season, and having to drive up to Afton four days a week. I left this afternoon very pleased and enthusiastic about the uptick in numbers of travelers. It's going to be a good year.

Those pictures are priceless, glad you had a good day :o)

Sounds like a great day, and love the vintage photos!