More about The Leisure Seeker 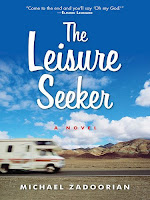 I said I'd talk about The Leisure Seeker when I finished it, but I'm struggling with writing a review. Heck, I'm struggling with knowing within myself what I think of this book! Is a book "good" because it's superbly well-written, or does it earn that accolade if it has a profound effect on the reader? In the case of The Leisure Seeker, it's so "good" that I'm not sure I'm going to be able to finish it. Let me explain.

On one level, it's fun to read about people traveling across Route 66 when the author clearly has been there and done that. Although Zadoorian is geographically quite accurate, I don't always agree with his assessments of places along the Route. Not by a long shot. It's written in the first person, through the eyes of one of the travelers, but we all know that opinions expressed by a first person narrator are generally those of the writer. I sense a certain contempt for Route 66 as a whole, and certain places specifically. Cuba, MO is NOT a "depressing little hell hole", for example. Maybe if I finish the book I'll learn that he didn't really mean all of his invectives. He apparently does like some things -- Ugly Crust Pie at the Midpoint and the Rainbow Arch Bridge in Riverton, KS to name a couple. And there's no doubt that Route 66 is the third character in the book.
Ok, so why am I unsure of whether I can finish it? Because it has to be just about the most depressing book I've ever read! (Well, maybe it comes in a close second to a novel I read once while on a race on our ocean-going sailboat, in which all the main characters die a terrible drowning death at sea during a race on an ocean-going sailboat.) See what I mean? This book just hits WAY too close to home for me. Why? Because I'm no longer a spring chicken. I can envision myself taking a "final" trip across Route 66, just like Ella and John in the book. I am at the point in my life where I am able to understand the thoughts of people who are no longer young and for whom sunsets are more vivid but are also harbingers of the waning of life. If there's one thing at which the author of The Leisure Seeker is supremely competent, it's getting into the minds and hearts of the elderly. I guess I'm not quite "elderly" yet, but it's not that far off. Right now, I'd prefer not to be reminded of the pitfalls.
That Michael Zadoorian is able to elicit such strong emotions probably says that he's a fine writer. I acknowledge that the fault is with me, not him. What he's produced is an easy-to-read, colorful novel with extremely interesting and somewhat complex characters. Route 66 fans will be fascinated as they recognize all the usual icons along the way. But for me, after an hour of constant tears and tiny sobs (which caused my dialysis technician to ask me twice if there was something wrong), I've decided to put the book aside for a while until I get a grip on my emotions. After all, I only have about 30 pages left.
Posted by Laurel at 4:06 PM

I, too, have started to realize I'm truly middle-aged, and it's a sobering thought. Why is it that just when you get to the point where you can truly experience the joy that life brings, you also figure out that you won't have forever to enjoy it? I suspect it might be connected.

Hope you can find your way back to the book.

In the meantime, we might not be spring chickens anymore, but we've still got plenty of "pluck!" (Groannnn...yeah, that was pretty bad.)

I think you conveyed very well that Zadoorian's novel elicited a lot of emotional reactions, including ones that might make a reader uncomfortable because it hits closed to home. So I'd say he succeeded brilliantly.

When I interviewed Zadoorian, he said he greatly enjoyed Route 66, and I have no reason to disbelieve him. But you have to remember he was inhabiting a particular character while writing the book -- and the character's viewpoint may have contrasted sharply from his own. Especially when said character is old, sick, a bit cynical and a bit cranky.

I'll say this -- it's going to be one interesting movie. And I'll be eager to hear what you think of the ending.


Laurel, you have a long time and many adventures left in you, yet. God wants you to have abundant life.