Sometimes it's hard to reconcile my love of Afton Station with my need to wander. In this respect, today was a real killer -- sunny, warm, emerging leaves on trees, greening fields, a floral aroma in the air. Knowing that there will be plenty of days like this as spring emerges, I realize I need to work on my will power. I could have driven right past and enjoyed a day in the country, but I knew that once I got to Afton I'd be glad I was there. So I sublimated my wanderlust by taking a quick 15-minute side trip through Claremore, where I snapped a few pictures. And... here they are!
Here's the main street of Claremore. It makes the town look bigger than it really is. In the far distance, at the top of the hill, is Rogers State University. 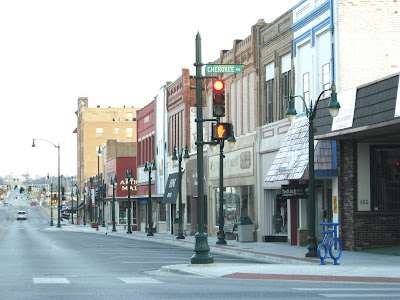 Here's a former motel on the old alignment of Route 66. I suspect it's private housing now. I remember when it was a cute little southwestern-style motor court. 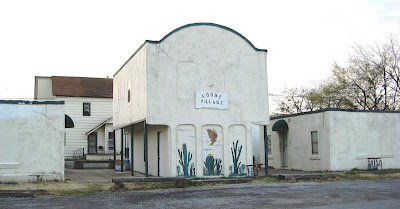 This is the J. M. Davis gun museum right on 66. Never been in there. I'm not into guns. 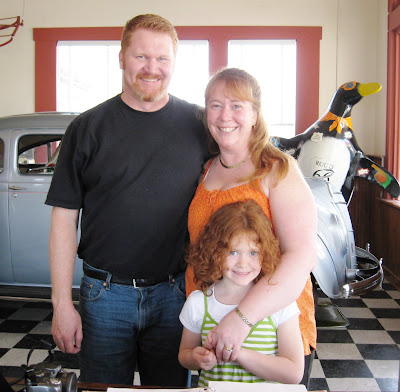 Several families had small children, a situation I always like a lot. There was a couple in a big trailer who were about to quit Route 66 and get on the interstate for the rest of their trip to California because they were very disappointed with the signage in Missouri. I fixed that by selling them a guide book. They left happy.

I was too busy for more photos then, but I'm disappointed that I didn't get one of Mike and Kerri Wiltfong from Missouri. Mike is an old friend whom I haven't seen for about 8 years, and I was thrilled when David brought them in. So sorry I didn't have more time to talk to them!
Then, as if we had contracted a plague, everyone left and not another person came through the door for the next three hours. Tattoo went home, but I remained waiting for someone who had told me that he'd be there late in the afternoon. I twiddled my thumbs until suddenly people started coming through the door again. There was a couple from Tahlequah, OK and a couple from Ft. Smith, AR. And finally, my much anticipated guest.... Cole Starr is a 16-year-old young man from Arkansas who is one of us -- a crazed Route 66 enthusiast! I'd "met" him on email in the past, but never in person until today. He arrived with his wonderful grandparents, Joe and Beverly, and they were pleasant, fun, and as enthusiastic as Cole. I liked Cole so much that I offered him a part-time job at Afton Station when he gets out of school in a couple of years. His dream is to work on Route 66, so who knows? Here are the Starrs. 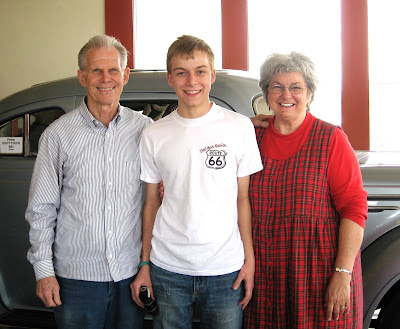 I finally left at about 4 p.m. and then got stuck in a massive traffic jam on I-44 on the way home (That's what I get for hopping on the Interstate to save time! I should have stayed on 66!) People were out of their cars and there were helicopters overhead, so I knew it must be a bad accident. When we finally crept past the accident, it was pretty awful, and looked like it involved a State Trooper car. I'll find out on the news later, I'm sure.
Ok, I'm TIRED! Big weekend.... big fun... and now for some big rest! Nighty-night!
Posted by Laurel at 6:25 PM

Wonderful to see Cole, a member of the younger generation, being enthusiastic about the Route :o)

I was 15 or 16 when I "discovered" Route 66 (I'm 33 now). I wasn't an outcast, but it was hardly something that I could talk about with any of my friends back then...even now people don't understand my obsession with it. How exciting that there are still "kids" out there that find the road so fascinating. Cole is very lucky to have grandparents to support his interests and take him on a road trip...it wasn't until last year that I took my first drive on the Route.

Calling J. M. Davis' collection a gun museum isn't wrong but it's not entirely right, either. Yes, guns make up the bulk of the display but the museum also includes 1200 beer steins, a slew or two of old musical instruments, plus other non-lethal stuff. Close you eyes and walk by the guns (don't trip over a cannon) and you'll still get your money's worth.

I was in my teens when Manhattan Transfers version of "Get Your Kicks on Route 66" first got me interested in Route 66. However, it wasn't until my late 30's that I was finally able to start exploring it.

I LOVE the JM Davis Gun Museum! But, then, I am a gun enthusiast.

You're right, Denny and Trevor, I really should give the Davis museum a look. I do enjoy history, and I'm not a gun hater or anything (my dad was a gun collector), I just find them boring in large quantities.

Love the pics, and sounds like a great day at Afton! Good for Cole for understanding the lure of the road and the appeal of the journey. I think he will enjoy his life, and his curiosity will serve him well.

Good job on steering that couple back to Route 66. Disappointed in MO signage?! *gasp* Sometimes you have to look for it. It doesn't always jump out at you!

Today is my lucky day :)
Apple is giving review copies of iPad to 100 lucky person. Go to http://bit.ly/cmmVr7 and apply for it.

If you wish to play Madden, NCAA Football, FIFA, NHL2K and Fight Night tournaments on your Playstation 3 or Xbox console online for cash - we receive applications for QA testers now. Join us on Facebook until end of March and you can receive $2,000 in cash: http://www.facebook.com/group.php?v=wall&ref=mf&gid=298821430083&_fb_noscript=1