Phil on the run

Ron M. and I went up to Afton today with the sole intention of meeting Phil Rosenstein when he ran through town.   Since I'm not usually there on Thursday, I didn't expect many other visitors, but we did have three others drop in during the few hours we were there.   Also, when we arrived at 10, my ex-husband David and Jim, one of our oldest and dearest friends from "back home" were there, on their way to a fishing trip in Missouri, so I got to visit briefly with Jim and catch up a little. 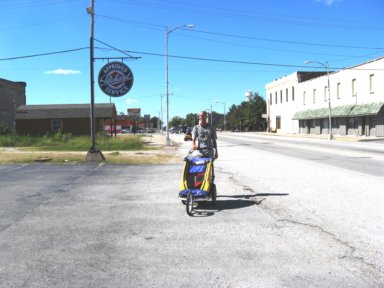 Running into Afton. Check out the huge crowd that came out to meet him --not!

Phil appeared on the horizon at around noon and stayed for a couple of hours, during which time he told us his running adventures since Tuesday.   For one thing, he had told me on Monday that his greatest hope for this trip was that he could find someone to take a photo of him at the Andy Payne statue in Foyil.  Andy Payne was the 20-year-old local boy who, in 1928, won the first "Bunion Derby", a cross-country footrace that was run, for the most part, on Route 66.  The Great American Foot Race.   For obvious reasons, he's one of Phil's personal heroes.  By great coincidence, Phil met a professional photographer while they were both stopped at the Blue Whale down the road, and the photographer offered to drive down to the Payne statue and wait for Phil so that he could take a series of professional shots.  There are nice folks all up and down Route 66! 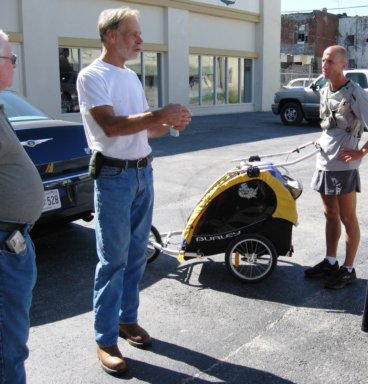 Chatting with some other visitors at the Station

At about 2 p.m., Phil ran off into the east, heading for Miami tonight.   I can only say that I have enjoyed getting to know him, and wish him well for the remainder of his trip. I'm sure he'll be well taken care of by other Route 66ers along the way.

Do we know what route Phil's taking for the whole trip?

I hope he got the picture with the Andy Payne statue! The Bunion Derby is one of the greatest chapters--and promotions--in Route 66 history!