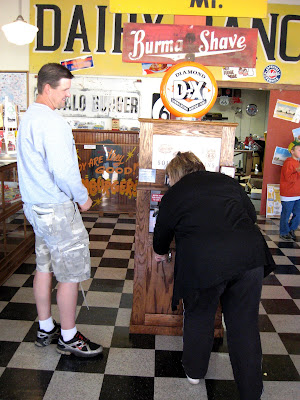 I love it when stuff like this happens. Our first guests at Afton Station today were a father and his 7-year-old son from the state of Washington. While the little boy flirted with Tripper, my giant penguin, the father revealed himself as an avid squashed penny collector with "two shoeboxes full of them at home". He has been all over the country collecting squashed pennies, and couldn't wait to get to my machine. He'd brought several rolls of quarters and a bunch of old, pre-1982 copper pennies in absolutely great condition. While he was working the machine, a couple from Australia walked in. The Australian gentleman occupied himself by looking at the cars while his wife stood and watched Visitor #1 squashing pennies. She seemed so befuddled that I asked her if she'd never seen such a thing before. She hadn't, and was clueless about what he was doing. With that, the penny squasher turned to her and not only showed her what he was doing, but also gave her two quarters and a penny to squash. When the penny emerged from the machine after her five turns of the crank, she let out a very loud squeal and was absolutely excited beyond words at this newfound phenomenon. She said it was like magic, and she wanted more! The visitors then exchanged email addresses and promised to get in touch with each other about exchanging pennies from their own countries. (Yes, they do have American penny squashers in Australia, but not many). It was a joy to watch! 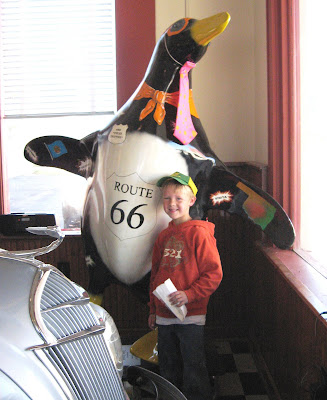 There were twelve visitors today. Other than the Washingtonians and the Australians, we also greeted folks from Norway, Kansas, and Bixby, Oklahoma. Ron M. was with me, Betty stopped in for a while (and brought me the most lucious pumpkin bread -- with coconut! -- that I've ever tasted), and David and his family came by for a bit, too. T'was a nice, cool, crisp, and friendly day.

Great dialogue about the squashed pennies. Glad you had some visitors today.

Love the penny anecdote! Sounds like a great day.