Ethyl gets her hose!

When I arrived at Afton Station this morning, the first thing I noticed was that Ethyl had finally been fitted with her hose and nozzle and a few other parts. Now we can pump our 13c/gallon gasoline -- NOT! Fred is yet to be fitted out, but maybe by next week. 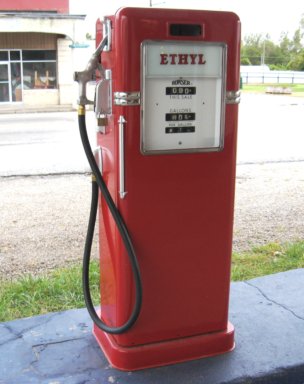 I opened early in order to receive a scheduled group of 9 elderly gentlemen from the Spring River Christian Village in Joplin, MO. They all must have had a double shot of sugar in their morning coffee, because they were the sweetest bunch I've ever hosted. I think they may have spent more time hugging me than looking at the old cars. One guy asked me if I watched Lawrence Welk. I told him I did.... and didn't add "but not since the '60s". LOL! I really loved this group. 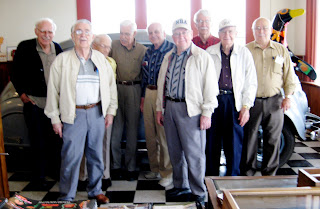 When I told some visitors from Milwaukee that I had been there recently, they attempted to get me to move there. Not really a bad idea, since it's a sensational city and I'd be closer to my daughter, but there's no Route 66 there, so I guess not.
My other guests weree from Stroudsburg, PA and Rensselaer, NY. Also, my ex stopped in and we chatted for a while. I left early to attend a meeting tonight, and I drove home in spitting rain.
Posted by Laurel at 4:16 PM