On the way to Afton today, I saw this sign. I just thought it was funny. Anybody need a free cocker spaniel? (I found out later that they were referring to a Webkinz cocker spaniel. I didn't even know what Webkinz were until I looked it up.) 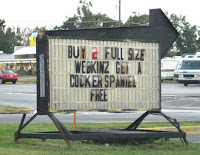 In Afton, I saw this. I'm not sure what it is, but it sort of looks like a haunted shanty. :-) 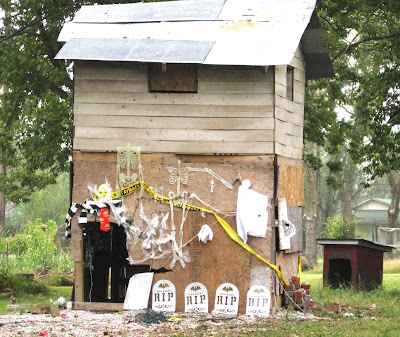 I was jotting "to-do" notes to myself this morning. One of them said "Embed YouTube video onto blog". I had to pause for a moment. Fifteen years ago... no, maybe as recently as ten years ago... a person seeing that would have thought they were reading Martian.... or the writing of a crazy person.....or maybe just gibberish. It made me giggle. Now, if I could just figure out how to embed that video....

Although it was raining in Tulsa when I got home, it was a beautiful day in Afton all day. I had 9 visitors, not including "regulars" Betty and Mike Pendleton. A mother and daughter, traveling from San Diego to St. Louis, got off the interstate just to see Buffalo Ranch. They had spent many happy hours there on trips when the daughter was a kid and they just wanted to do a little reminiscing. They found their way to Afton Station after experiencing the terrible disappointment of seeing that the old Buffalo Ranch no longer exists. I was glad I could give them a little pleasure when they saw that I had so many signs and other momentos of the place, saved when it was torn town.

A trucker from Texas, heading for St. Louis, was lured in by the Packard sign outside. He had a '55 Packard when he was young, but because it wasn't considered cool by his friends, he "stupidly" (his words) traded it for a Chevy. He has never forgiven himself for that. He enjoyed reliving some old times by being around all of our '50s era Packards.

A couple from Leoti, Kansas told me a great (but scary) story today about a bison overturning and totaling a friend's SUV, just a few miles from their home. The driver was trapped in the car the whole time, and although he was unhurt by the bison attack, he couldn't get out, had no cell phone with him, and wasn't rescued for several hours while the bison were continually kicking, butting, and rolling the car. Yikes!

I just love all the stories I hear from my visitors. It makes the long drive SO worthwhile! But I must go to a meeting tonight, so no more stories today.
Posted by Laurel at 4:06 PM

*I* sure wouldn't want to mess around with a buffalo!!

To put up a video, first get the embed code. Then on the new entry screen, switch the tab from "compose" to "edit HTML." Then paste the embed code. Switch back to "compose" and there you go! Email me if you have any problems!