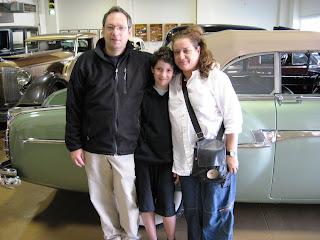 I mentioned some time ago that I had audited my guestbook and found that we had hosted visitors from 17 countries and 47 states thus far in 2008. Today I was able to add a new country to the roster in a most pleasant way, with a visit from a family of three from Israel. They've been to the U.S. quite a few times previously, but this is their first Route 66 trip. Their 13-year-old son was the strong silent type, but is clearly enjoying his three-week vacation and was taken with the penny squashing machine, as most kids are. The wife spent some time telling me about life in Tel Aviv, which is dangerous enough at present to make it impossible to let kids go outside the home unchaperoned.


Although it was a pretty quiet day at Afton Station, we did have 12 visitors. A lovely couple from Great Britain, on a motorcycle, were very interested in everything Route 66. They're doing almost the whole Route and we shared stories about places we've both visited. Larry "Grandpa" Bradley stopped in. He wrote the lyrics and performed on the popular CD "Route 66 Lost and Found" on which his 85-year-old mother accompanies on the harmonica. He didn't come in to sell his CDs, but I told him how much we enjoy the one we often play at the Station, and I ended up buying 10 of them for resale there. Most of the songs are about Route 66, and a few are very humorous.

Other visitors included a couple from Chicago, a local couple, and two dogs who just walked in the front door and hung out for a while. One was the mother and the other a very young puppy. There are always dogs running around loose in Afton, so we simply greeted them as guests and gave them a little water before they voluntarily hit the road. 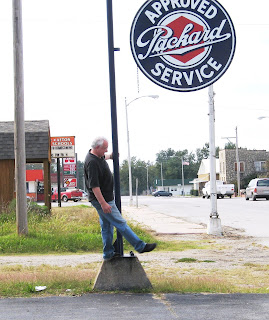 I think Ron might have been a little bored on this slow day. I caught him trying to climb the sign pole.
Finally, here's a photo I took out of my closed car window before we left Tulsa this morning. It was in a local restaurant parking lot, and I didn't want to be conspicuous while taking the picture. Had to do it, though! Remember The Grapes of Wrath? Well, apparently the Okies are still alive and well in Oklahoma! 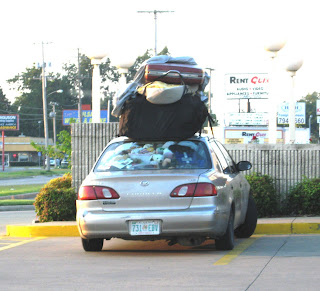 Wow, that is quite a pile on top of that car!!

I'm curious...what 3 states are missing from your guestbook?

As of right now, I still lack visitors from Montana, Hawaii, and Massachusetts.   If there's anyone out there reading this from any of those states, come visit!