Yesterday I described Michael Wallis's speeches as "inspirational", and last night's was no exception. The terms speech, lecture, or talk don't quite fit when it comes to Michael's offerings from the podium. Last night, in his prologue, he mentioned that his ancestors had been clergy and that perhaps he inherited his propensity for preaching sermons from them. Sermons! Yes, that's it! Sermons, about not only the charms but also the importance of taking the slow road, both in travel and in life. Last night, his sermon was particularly impressive, as it was presented before several hundred folks with a fondness for things historic, in a magnificent church sanctuary reminiscent of a fine ancient European cathedral.
While chatting briefly with a couple of us a few minutes before going in to deliver his sermon, Michael indicated that since we'd been to so many of his talks in the past some of what he planned to say would be familiar to us. Not so. Very little of what he said last night was a repeat of anything I'd heard before. He spoke at length about his journey down the Mother Road (in a convoy of Cadillacs!) with John Lassiter and other creative types from Pixar when he was hired as the Route 66 consultant for "Cars". None of the Pixar folks had had such an adventure before. He talked about leading a bus tour a few years ago on which one passenger was a Brooklyn guy taking his first trip out of the big city and how it changed his life. He told about other people he's met along the road on his numerous sojourns. As the sermon progressed, it became clear that the theme centered around not only the people who live or make their living on the Road, but also the folks who journey down the Road and the lifelong effects such a journey has on them.
Being where I am now, both in life in general and in Afton, Michael's phrase which stuck in my mind with the strongest glue was "death by interstate". As I look around Afton, I know exactly what he means. Actually, I always have. I just never heard such a perfect and succinct way of expressing what the interstate has done to so many small towns such as Afton, for which "past it's prime" is an understatement. If I wasn't able to hear a Michael Wallis sermon every once in a while it could get downright depressing in Afton. But he always gives me hope, reminds me to appreciate what is left and to always remember that the Road isn't the buildings, it's the PEOPLE.
(Michael, if you're reading this, I owe you a big piece of your favorite home made pie for the inspiration you gave me last night.) 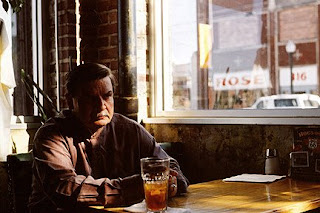 Nobody was taking pictures last night so I followed suit. Therefore, I borrowed this awesome pic of M. Wallis from my friend Emily Priddy, taken one day when we were all hanging out at the Blue Dome Diner in Tulsa.

Meanwhile, it was another slow day at Afton Station today. The fellow who sold us the gas pumps dropped in with his son to see how they looked after restoration. He was extremely pleased. He confirmed that the pumps are originally from Afton and probably from our very station.

Great enthusiasm was exhibited by a visitor from Kansas City and his father-in-law from Colorado. The KC guy and his wife had driven almost all of Route 66 in August but on that trip had arrived at Afton Station after it had closed. Today, he drove down with his visiting father-in-law just to see it from the inside, take pictures, and give his father-in-law, who grew up here, some moments of nostalgia. They stayed for over two hours and took some awesome photos. I've asked him to email them to me so I can post them here. I also had visitors from Pasadena CA, among a few others. Betty was with me for a while, too. 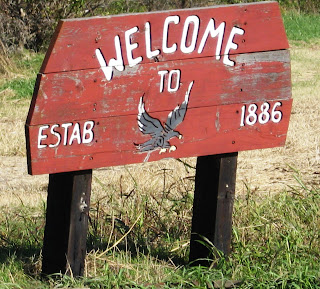 Leave it to Afton to have a "Welcome" sign that lacks the name of the town!

The times, they are a-changin': I seem to recall someone making fun of me for attempting that shot of Michael under those weird lighting conditions. ;)

How great to hear how much you enjoyed Mr. Wallis's talk. I think a lot of us feel that traveling Route 66, or any back road, is a metaphor for a life well-lived. A slowing down to appreciate what is around us, a respect for nature, and a joy in loving the simple things in life.