Uh oh... where are the tourists?

There was frost on the pumpkin this morning (literally!) when I left for Afton. I had no idea how ominous this was -- until it was 2 p.m. and I had not had a single visitor to the Station! Yikes, is winter here already? Is tourist season over? I'm beginning to feel some anxiety about the coming season as it applies to tourists. This winter, do I spend two hours driving up to Afton (under possibly questionable weather conditions) just to have no visitors at all? Or do I decide to stay home, only to find out later that this was the day a busload of tourists from Tokyo decided to stop for a visit? Do I post regular hours on my door, post a "Call for Appointment" sign, or do I just sit here and freeze each morning while the place warms up, hoping to see a human soul? Add to all of this the fact that gas prices here in Oklahoma have fallen to $2.00 or even less, so will that bring out more local tourists who had been holding back on road trips before? Sometimes I wish: 1.) I lived closer, but that's not going to happen, or 2.) that I had a larger pool of weekday volunteers rather than just Marly, who lives nearby but whom I hate to bother too much since he has a business of his own to run. That's undoubtedly the host of dilemmas that will keep me tossing and turning tonight.

I finally left at about 2:30 and drove around town a bit. When they tore down the historic old Cities Service station (a National Trust property, I might add), they turned the concrete pad on which it stood into a town "park" (quotation marks denote irony) by adding a couple of chairs, some fake flowers, and even an umbrella for those who seek shade while watching the speeding semis roll past on Route 66. The "park" is right down the street from my Station, and when the Cities station was still standing it was one that we considered buying, until we realized it would be too small to meet our needs. For this reason, I tend to feel a touch of guilt about it. Could we have saved it? I hate to see historic properties demolished. 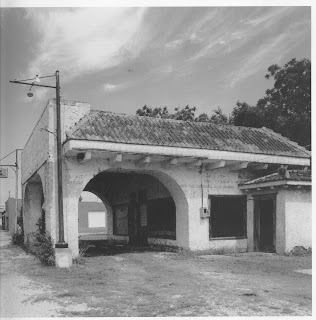 Here's the old Cities Service station before demolition. (Photo from "Along Route 66" by Quinta Scott). Looks a lot like Afton Station, doesn't it? 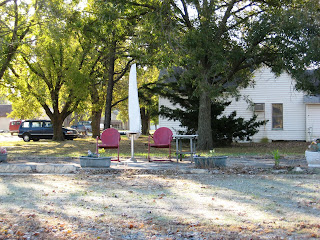 As I mentioned before, the old Buffalo Ranch tourist stop was also torn down and a truck stop built in it's place. At least the new owners continue to pay their respects to the venerable old tourist trap. There are still bison grazing out back just like in the past, and there's a bronze buffalo guarding the gate to the pasture. Today, I noticed that there's now a covered wagon out back, too. You can't get much more tourist trappy than that! Now, if they'd just add a rattlesnake pit and some Indian dancers..... 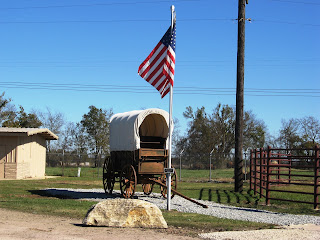 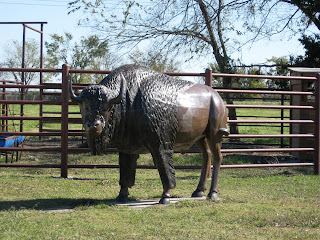 ADDENDUM: Just had a call from a couple from Norway that were absolutely crushed to find I wasn't open. They called from in front of the Station. It's 6 p.m. now, I'm almost two hours away, and obviously I'm not able to drive there to let them in. This frequently happens. I'm so sad.
Posted by Laurel at 5:06 PM

What a shame about the Cities Service Station. The picture of the "park" just makes me sad. :(

Hmm, quite a dilemma for the coming winter. Can you contact some other Route 66 business owners with similar weather, and find out what they do? If the roads are bad, you'd hate to battle to get in there only to sit there with no visitors.