The bus tour was a great success, at least from the viewpoint of myself and the others who were helping out at Afton Station today. I hope the bus riders felt the same. There were about 32 folks on the tour, and since they were primarily professional preservationists, they showed as much interest in the building and the cars as they could in the half hour they were there. I met people from New York, Ohio, North Carolina, Virginia, Arkansas and Vermont. I met others, but their nametags were turned around so I couldn't read their hometowns. :-) I got to visit very briefly with my friend Jerry McClanahan, who was leading the tour. He's the author of the absolute BEST guidebook, the EZ66 Guide to Route 66. http://tinyurl.com/5ju2wl
Kaisa Barthuli, from the National Parks Service Route 66 Corridor program was also on board. I've met her a number of times before and she's an amazing lady.

Prior to the arrival of the bus, we had a group of four folks from Florida come in. They're in town looking to replace their current motorhomes with Newell Coaches, which are made just down the road. While the bus was here, we also greeted four folks from Maine who are doing a full Chicago-to-LA Route 66 trip. One of the men got my attention by showing some interest in the buildings across the street which are for sale. I wish I'd had more time to give him my full sales pitch. I'm really getting quite desperate to find buyers for those buildings before the little grocery store closes and turns Afton into a ghost town. We also had visitors from Tulsa who, I'm sorry to say, got a little lost in the shuffle of all the other people there.

The four of us who were there to host the bus tour left shortly after all the visitors left (Betty, Ron J., David, and me) and we drove to Vinita for lunch at historic Clanton's Cafe, the oldest family-owned restaurant on Route 66 (since 1922).

Remember Phil the runner who stayed with me a few weeks ago? He made it to Chicago, having run all of Route 66. Congratulations, Phil! Now he's going on to the East Coast. Amazing! Here he is in front of the Giant in Atlanta, Illinois, not far from Chicago. 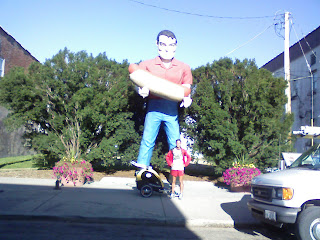 I think I might have that guidebook. I have several!

I've seen that giant guy, too. I love them!

A tour of true affectionados is way cool :o)