On the way to Afton this morning it was rainy and gloomy, so I stopped and bought three yellow potted mums.  It just made me feel good.  By the time I arrived at the Station, the sun was peeking out and I was feeling the love.

The love continued when my first visitors were five Dutch guys on Harleys.  Three of them were gorgeous and the other two were just almost gorgeous.  Boy, those Dutch are a good-looking bunch!  I watched the "strip show" as they removed their rain gear after I assured them the rain had stopped in the west, the direction they were heading.  We haven't had rain for weeks, so this morning's minor thunder showers were refreshing, but they're over for now.

Work on the gas pumps is progressing, but there's a little way left to go.  Here's Ethyl, with some of her new trim pieces (The other one is Regular, but I think it should be named Fred, don't you?)  Anyway, they still lack the globes on top, the hoses, and the D-X decals.  We have all the parts now, but need to put them on.  Things move slowly around here because everyone is so busy. 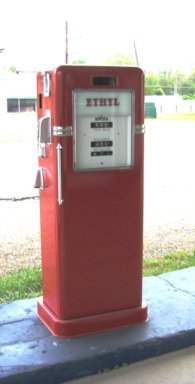 Two guys from Missouri stopped in with the vintage MV Augusta motorcycle one of them had bought.  It's Italian, and in many rusty pieces.  When I asked if he planned to restore it, he said no, that he'd just "use it for a lawn ornament like all the others."   I'll bet his neighbors will be thrilled.  LOL! 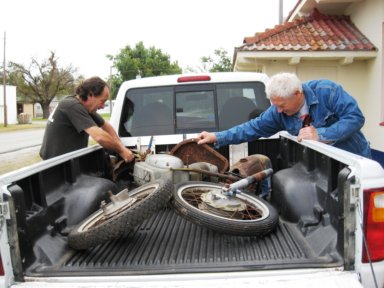 People from Colorado, pulling a medium-sized trailer, came to visit and wanted to know about other attractions in the area, since their guidebook was inadequate.  I told them about the original 9-foot alignment down the road and assured them that they could navigate it relatively easily if they just drove very slowly.  Then I waited in fear for the next half hour, worrying that they wouldn't agree with my assessment of the trailer's ability to do the road without major breakage of household items within.  I never heard from them again, so I guess they either liked my suggestions or are still stuck somewhere on the old alignment.

I've lived life for many years (many!) but for very few of them have I dealt with the traveling public on a daily basis.  I'm finding out a lot about chronic complainers.  You can tell them from those who have occasional legitimate complaints.   Hey, when you go into a visitors' center, how about not complaining about something the proprietor can do nothing about?  How about not whining that the signage in Missouri isn't adequate? Mentioning it is just fine, but don't act like it's MY fault.  I'm two states away from Missouri, and I certainly hold no sway over the Missouri Dept. of Transportation!  And it's also not my fault that your 12-year-old guidebook is out of date (although I'd be happy to sell you a better one!).  End of rant....

I had 18 visitors today, hailing from the Netherlands, Washington state, Colorado, and several locations in Missouri and Oklahoma.   Except for the complainers (I won't say which ones they were), all of my visitors were great!

Sorry to hear about the complainers. Why would anyone think that you have control over Missouri, or over their out-of-date guidebook? Don't let those people get to you--that's just silly on their part.

I definitely like Fred and Ethyl! We had three instruments in our Microbiology lab that we named Lucy, then when we got the second one, Ricky, and then the third one was Ethel. I'm sure there will be a Fred in the future!

Glad to hear you had a good day!