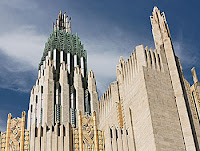 No Afton Station for me today, but this afternoon I spent a little time arranging a dinner for a group of Route 66 folks who will be attending the National Preservation Conference which will be held in Tulsa on October 21 - 25. Tulsa is considered one of the art deco capitals of the U.S. because of the large number of art deco buildings here, most designed and erected during the oil boom in the early 20th century. It's quite a feather in the cap of Tulsa to get this prestigious conference. A number of Route 66 people will be here, either as attendees or giving presentations. The greatest thing, as far as I'm concerned, is that the Conference is sponsoring four Route 66 bus tours that week, two west on Route 66 and two east on Route 66. And AFTON STATION IS A SCHEDULED STOP FOR BOTH EASTBOUND TOURS!!! (Can you tell I'm excited??) I'll have to get the place all spruced up for the occasion.

A short (under 2 minute) video of some of the deco architecture in Tulsa is here:
National Preservation Conference, October 21-25, 2008
Posted by Laurel at 2:46 PM

SCORE on the tours! That's great news. I'll look forward to hearing about how you get the place all "spiffy."

I love Art Deco architecture, but didn't realize that Tulsa has so many great examples. Great to know!