The morning started out slowly at Afton Station, so it was a great time for cleaning, rearranging, and snapping a few photos. Ron M. and I spent some time doing a little of each. Herewith are some of the photos we took.
Isn't this a wonderful vintage gas station? 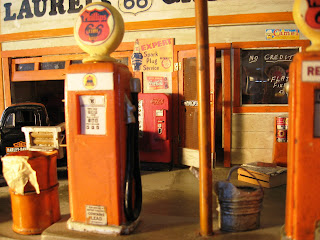 Surprise! Pull back and you'll see it's a model. My ex (back when he was my husband) had a lovely habit of giving me artist-created one-of-a-kind models each year. A Texas artist made this one and named it Laurel's Station. The detail is incredible. Unfortunately, the interior lights aren't working now. I have some better pictures of it somewhere, but I don't have time to look for them now. 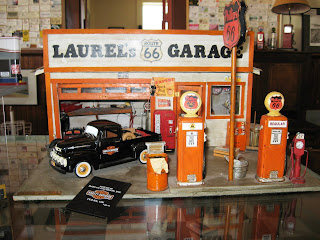 Ron took this artistic shot of the mishmash of goodies that assault the senses when you enter Afton Station. 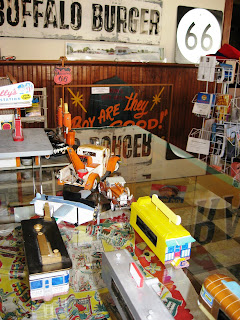 Lucky you! Now travel with me into the Afton Station restroom.. Here's a mural (a.k.a. world's largest toilet paper dispenser) I painted several years ago. 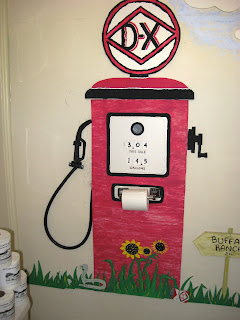 The famous Afton Station toilet paper, prized by travelers, each of whom is given one as a souvenir when they come to visit. I do this because my retro motto is "Cleanest Restrooms In Town". Since we're the ONLY public restrooms in town, the title is easy to retain. :-) 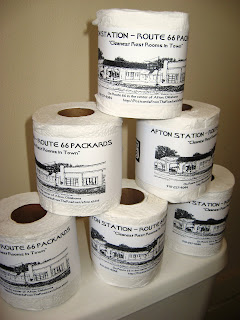 Ron went outside and snapped these shots when I was busy with guests. No self-respecting service station would be complete without a back yard full of rusty vehicles. We are no exception. Here are David's "parts cars", although I've never seen him take any parts from them. 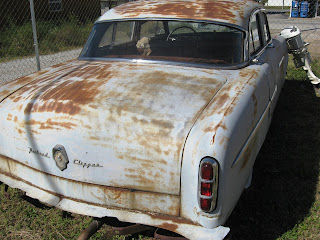 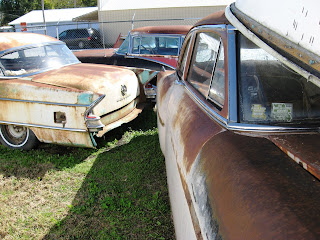 Ok, enough of that. After a slow start, people started coming in the door of the Station around noon. By the end of the day, we had visited with 12 people. Two ladies (0ne from Oregon and one from Tulsa), in the area for their 30th college reunion, came to visit and stayed quite a while, playing with the pressed penny machine and looking at the cars and books. One of them won my heart because she's a postcard collector like me. She spent quite a bit of time going through my postcards for sale, and ended up buying 15 of them. Some bikers, pedaling their way from Arkansas to Ponca City OK, stopped very briefly because they had to get moving to meet their arrival goal. The older of the gentlemen was having painful knee problems so I invited them to come in and rest for a spell, but they were in a very big hurry. A local father and his two sons stopped by on their way home from a Boy Scout campout. Some folks from Michigan also visited. Toward the end of the day, we had a visit from my friend Emily, the photographer who took the shot of Michael I used in my last post. She drove up to say hi and chat a while. Her vest was covered with Obama buttons (yeah!), some of them very funny. Beekeepers for Obama (she's a beekeeper), Redheads for Obama (yeah, she is), Recyclers for Obama (she's that, too), Photographers for Obama (yep!), and quite a few more. My favorite was Hippies for Obama. I wish I'd bought one of those when I first saw them. It's too late now, I think.

And that was our Sunday!
Posted by Laurel at 5:41 PM

I love the model gas station! That is too cute!

My cousin sent me the web site for Obama buttons:

There are some really cute and funny ones. I have a picture of the Trekkies for Obama button up on my blog. LOL

Have a great Monday and a wonderful week!