It wasn't a busy day at Afton Station today, but the visitors were well-spaced, so we had the chance to chat with everyone who wanted to chat. Both the Rons (Ron M. and Ron "Tattoo Man" J.) were there with me all day. Tattoo Man was sporting a brand new tattoo, the sign from Soulsby Station in Mt. Olive, IL and the Shell Oil Co. sign. Here it is on his swollen wrist. 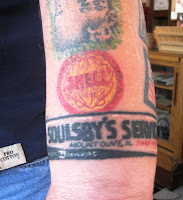 Our first visitors were Steve and Denise Wyatt from North Carolina. Steve has been a self-described Route 66 "fanatic" for many years, and has an extensive collection of Route 66 memorabilia, books, guides, etc., at his home. In fact, he became engaged to Denise on the Chain of Rocks Bridge in 2000. That's pretty romantic, and it must have worked because she's now his wife and a Route 66 fan, too. They're on their way to California (via the Mother Road, of course) to attend a wedding.

I wouldn't even have had any interesting photos for today's entry (other than the one of Ron J's arm) if Ron M. hadn't stolen my camera and slipped out to take some pictures while I was busy with guests. I didn't know the photos existed until just moments ago when I was downloading from the camera. Here are two of them, a shot of my Route 66 flag (we had been trying to photograph that last week, but the wind never cooperated), and a very creative shot of my neon Route 66 sign taken through the window. Very nice, Ron, and thanks! 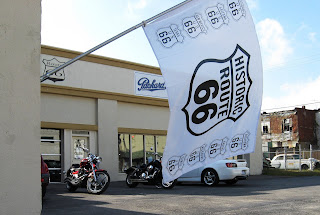 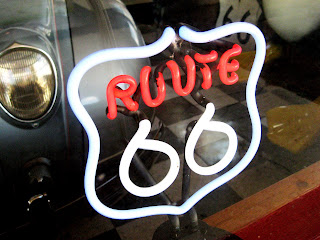 I've been to the Soulsby Station! Cool! I don't think I'll be tattooing it upon my body anytime soon, though. (grin)

Glad you had a good day, and love the pictures!