Early in May, I found myself feeling  a little bit pessimistic about the success of Afton Station based on my customary  comparisons of that month to the same month the previous year.  Funky weather was going to keep the travelers away, I thought.  Well, it didn't happen!  Just before I closed up this afternoon I did a quick total of the books and found that we had greeted considerably more visitors than last May, and furthermore had made more sales than any previous May as well.  Yes, I know that its quality rather than quantity that really counts (and I do have absolute top quality visitors!) but it also feels good to know that the popularity of Route 66 continues to increase.  It's been nothing but up, up, UP ever since I opened my doors 11 years ago, and I'm sure that other Mother Road business owners are finding the same statistics.  So, onward and upward, folks!   There's a great future ahead. 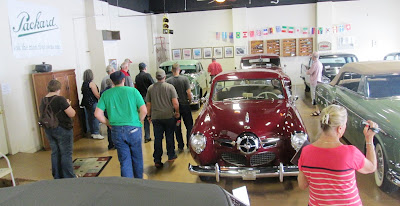 Morning visitors to Afton Station had a special treat today.   That included the 13 folks from the San Antonio (TX) Corvette Club and several others from various places.  David, my ex-husband and my partner in this Afton Station project, was at the Station transacting business with some people, but took about an hour to lead a group of folks who wanted to hear some in-depth information about the cars that only David can impart.   I know Route 66 very well but am not as well versed on what's under the hood of a Packard.  He, on the other hand, is an expert.  His talk to the crowd included many interesting facts about the brand and specific info about our own cars. 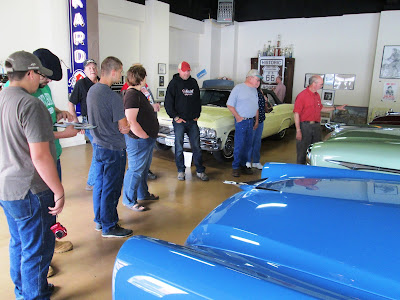 It was a special day, too, for a young Afton boy who visits us frequently on his bicycle.  Today, one kind Corvette owner allowed him to sit behind the wheel and take a wonderful imaginary drive around town. 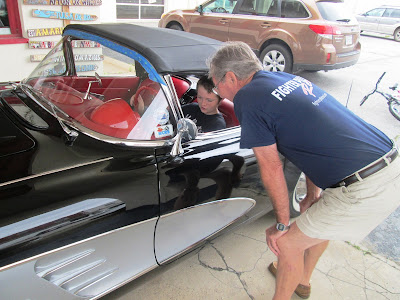 So May turned out to be a smashing success, and now onward to June.    Get out there and drive, folks.  You don't have to do the entire Route in one trip, but if you live near enough to 66  or any other of this countries much loved  historic highways, at least go out some day and explore what is closest to you.  You won't be sorry!
Posted by Laurel at 6:22 PM

Good news, indeed and the fact that the weather, that included an unusual amount of rain and a number 'rotation events', didn't knock the numbers down is very impressive. So happy for you.

That is great news. Especially if you kept the numbers going up through the 2008 and the following years.