I always try to get an accurate count of how many visitors come to Afton Station each day, but some days its easier to do than others.  Today, the people were in and out so fast that I was lucky to give each one of them my best smile and a hearty greeting.   I tried.  I really did.  Ron M. had his work cut out for him as, in his usual calm way, he continued to take the visitors back to the car showrooms and give them a few words of orientation to get them started looking at the cars.

For one thing, today was Alumni Day at Afton High School so there were people looking around at the town in which they once spent their youth, and most were dismayed by the downward spiral it has taken.  It was a pleasure to listen to a few people share memories of their Afton childhood, and it certainly sounded like it was a great place to grow up back before Route 66 was bypassed by the interstate.We also had our usual helping of visitors from out of the country, and also folks taking advantage of the long Memorial Day weekend to take shorter tours.

A tale of two countries. . . . these folks from Toronto, Canada 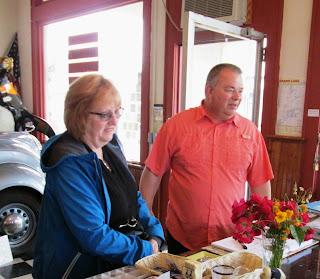 . . . and these from Christchurch, New Zealand 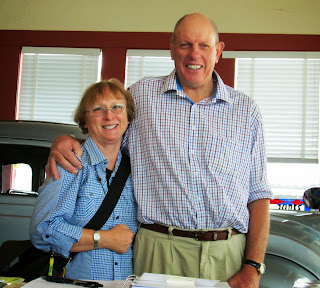 . . .had some observations to share.  Here, the men talk as the women make   purchases.  Perfect!  The New Zealanders spent night last night in the Elvis room at the little motel just east of Afton and enjoyed it. 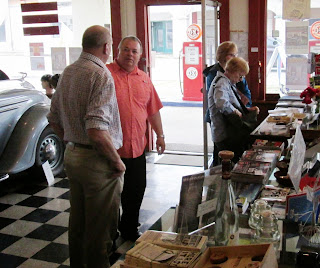 A couple from Kellyville, OK were in town to go to the grave of his great grandfather, Alfred Henry Roberts, who was the sheriff of Afton back in the late 1800s. 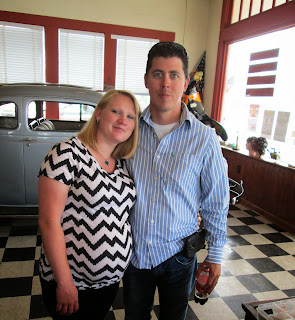 A couple from Round Rock, Texas was in town for the alumni festivities, and he is the nephew of one of my favorite Aftonites, Ruben Tipton.  Two young couples who came in separately but at nearly the same time, were from Valencia and Seville, Spain.  None of the four spoke more than a few English words.. Brave folks to cross American without language understanding, but it sure didn't seem to make them less excited about being on Route 66.Another young couple from Houston, Texas is in town for Rocklahoma, a huge outdoor rock festival that takes place each year, and this year will be spent almost entirely in the rain and mud.  They didn't seem a bit daunted by this. 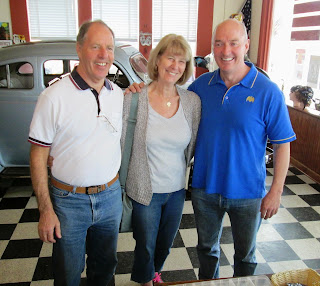 Other visitors came from Beaumont TX, Bowling Green KY, Miami OK, Quapaw OK, Houston TX, and El Reno, OK.  We also talked to a lady who will be opening a health food store in Afton soon.  I hope this happens for her and is a huge success.  More tomorrow. . . .