If you're tired of hearing about our torrential rain, I'm pleased to report that by the end of the weekend it should be over.  Meanwhile, Lake Afton was reactivated this morning. Lake Afton is nothing more than a low spot in the road in front of the Station, but if the rain is heaviest the little pond could stay viable long enough to spawn a nice small school of largemouths..

Today, the water receded by the end of the afternoon so the high school boys in their beat up pickups had to stop racing through it to see  how far it could splash.  None of this stopped our visitors from coming however, some a bit damp. 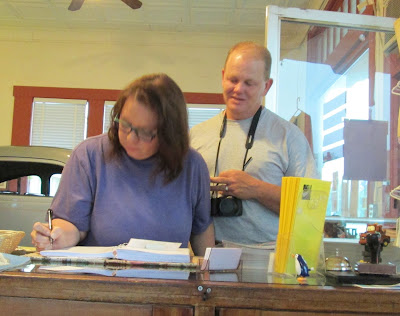 When this couple from Troy, Ohio arrived on their Harley dressed entirely in bright yellow rain gear I remarked that I was starting to crave French's Mustard.  That rain gear does its job well, and between good protection and a will to continue the riders were just fine, still happily traveling Route 66, and even honored us by spending a bit of time with us as they dried out.  They weren't going to let a giant downpour stop them from having fun. 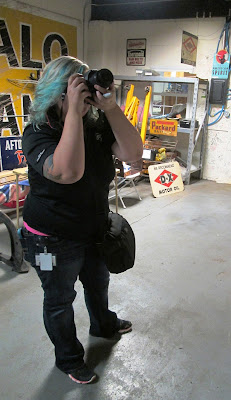 A nice lady representing the Cherokee Nation stopped to get some information from us for their business directory and stayed to shoot some great photos of the cars.  Outdoor photos of  the Station would have to wait until drier times, however. 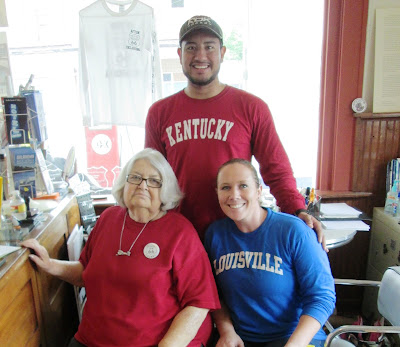 My ears perk up when I see or hear anything from Kentucky, in this case a couple with bluegrass connections and a fine sense of style.  In reality, they no longer live in Kentucky, but their loyalty persists.  They now reside in Lancaster, California.  They asked to take a photo with me, and I actually like the patriotic colorfulness of it. 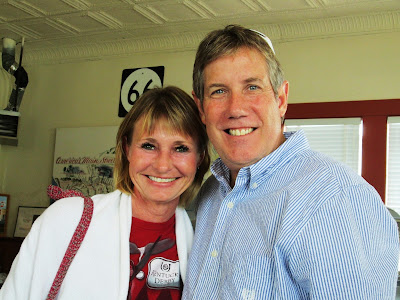 These two are from Little Rock, Arkansas (she) and Bastrup, Louisiana (he).  More beautiful, shiny smiles on a dreary day.

Our other visitors came from Fredricksburg Virginia, Forestberg Texas, Columbus Georgia, Liberal Kansas, Kingsville Missouri, and several towns near Kansas City. Two larger family groups who were vacationing at Grand Lake chose to spend the rainy day with us, too.

I was becoming nervous about getting low on some merchandise, but just in the nick of time some orders arrived and now we are virtually loaded up on anything you might want, including t-shirts, EZ66 Guides, beautiful embroidered caps, maps, and Route 66 flags.  One of my favorite new acquisitions are these sparkly t-shirts, which Robin has named "bling shirts".  Initially I only have a few but I plan to order quite a few more soon.  I love them! 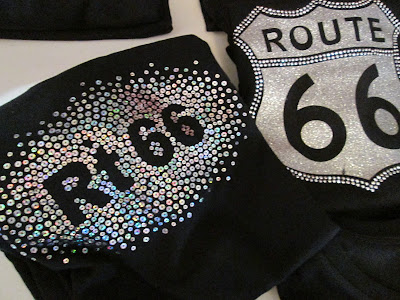 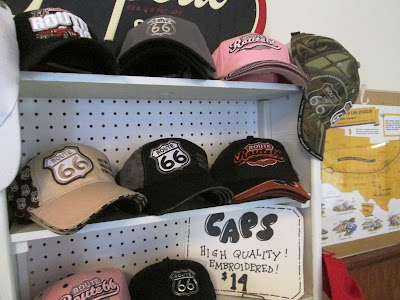 Come see us this weekend.  We are warm and dry and we  have popcorn!