What started as an uncharacteristic slow Saturday blossomed into a day of interesting visitors from here and there.  Since nearly all of the 21 the visitors came at the same time, I didn't get very many photos.  Ron M. snapped a few as people meandered around the shop and the showrooms.  Here they are. 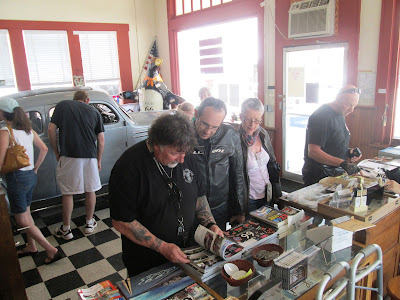 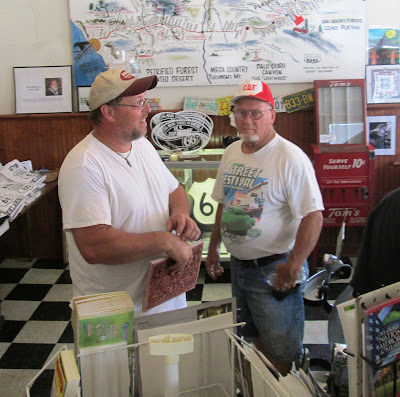 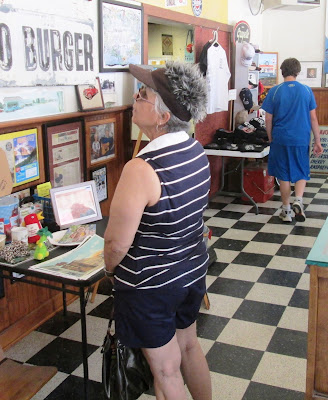 Folks came from Kansas City MO, Weir TX, Templeton IA, Geneva Switzerland, Moscow Russia, Bentonville AR, Rogers AR, and Yukon and Ketchum, OK,  There was also a "mystery man" who stopped in to see if we had any maps.  Clearly, he was walking a long distance and he had an enormous pack on his back and some other bags in his hands, and yet when asked if  he was walking Route 66 he said he didn't know what that was.  Nor was  he willing to say where he was going or coming from.  With temps over 90 today, we would have offered  him some water if he'd stayed long enough.

The gentleman from Moscow moved to Arkansas a few months ago after he won a Green Card lottery.  He loves it here because he doesn't like the frenetic crowded big city feeling of Russia's capitol city. 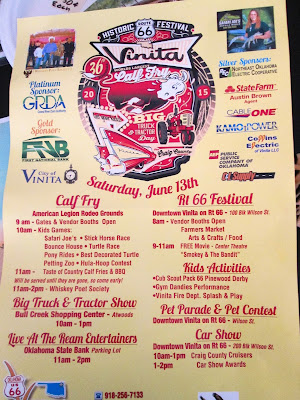 Next weekend, Vinita (15 miles from Afton) is having a very big festival based on the town's love of "calf fries".  There will also be music, booths, a car show, and much more.  It sounds like a loot of fun.  Here's the poster we put in our window.    Enlarge to read.   I presume most of you know what calf fries are.   Vinita is the Calf Fry Capital of the United States.  The many castrated cattle in the countryside around Vinita can explain it all to you.  (P.S. They are delicious.)

Every now and then a Spell Check error--that is letting a correct spelling of an incorrect word get by you--turns out to be awfully close to being a good pun. I'll bet that Vinita restaurants, shops, and Calf Fry Festival vendors do indeed hope that everyone who attends will have a "loot of fun." Glad you had fun today at Afton Station and hope you made some loot for the good of the cause.

Susan, the citizens of Vinita may well be hoping to make a lot of loot on the festivity, but I'm pretty sure the surrounding cattle are less than excited about losing their loot! :-) Thanks for the spell check!