Having survived another wild night of tornado warnings, hyperventilating meteorologists, and fitful sleeping, I was grateful to awaken to the knowledge that neither Tulsa nor Afton were affected by the tornadoes and storms that hit Route 66 towns in Oklahoma, Missouri, and Illinois.  Unfortunately, others were badly impacted, in particular the Oklahoma City area where 9 deaths have been reported.

Ron M. and I drove up under cloudy skies and observed a bit of field and stream flooding in the Vinita area. But shortly after we opened Afton Station the sun peeked out and introduced one of the most glorious days we've had this year -- sunny and cool and perfect for touring the Mother Road.

The first person to come through the door was Tattoo Man with the bad news that his beloved and brand new Stallion Trike was rear ended in  Tulsa yesterday and sustained a good bit of damage.  The good news is that neither he nor the woman driving the car that hit him were hurt.  I feel terrible for him.  The trike means so much to him.

David and Marly were moving vehicles around this morning, and the little red Citroen came home to roost.  Here she is, looking spiffy. 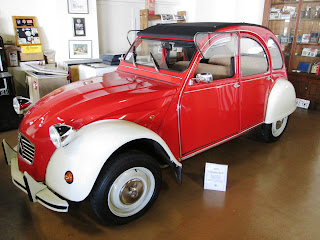 It wasn't a terribly busy day, although it seemed so.  Michael Scruggs was with us most of the day setting up the photo show he's having in our showroom for the next couple of months.  He has framed a lot of his best black-and-white Route 66 photos (and some others), and the works will be available to admire, and maybe even to purchase, every day we're open in June, July, and part of August.   Come see!   Here's Michael working on the invitation. 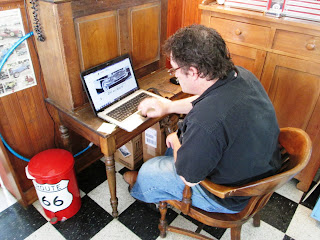 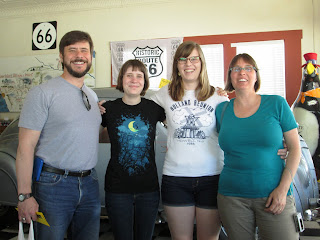 This Lawrence, KS family had the most interesting (and envious!) story of the day.   They were in Tulsa to attend the Paul McCartney concert at the BOK Center on Thursday night.   They had purchased four of the more economically-priced tickets to save a little money and still see Paul.  While waiting on line, they were taking photos of each other when an employee of the arena approached them and asked if they might like "better" seats.  Once they established that this wasn't just a common garden variety scalper, they said yes, at which time the man told them they could have front row center seats -- free!  He said they had a few tickets to give away and the family seemed like the kind of  "enthusiastic" people they like up front.   Can you believe it?   They said they could never imagine having such luck!   Despite being jealous, I wish to congratulate the Barnett family for such good fortune!  They had a great time and took many pictures, of course! 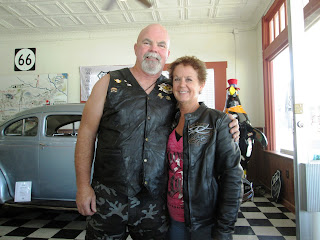 Another perfectly delightful couple came from Kansas, too.  These two from Edna, KS  rode up on their motorcycle and seemed to be genuinely enjoying this perfect biking day.  The motorcycle is new to them, but they said it's been very comfortable, even on long trips.  We sent them off to enjoy the rest of their Route 66 vacation.

The three men from Germany and Italy rolled in with a big motor home and bought lots of souvenirs of their trip.

Some time ago, Robin procured a nice glass display case when she quit her job at the post office, and it's been hiding under a shroud of dust in the back room until it was brought  into the light today.  A little cleaning with Windex and it's looking great!   We need more items to put in it, but at least it is out and where it can be admired. 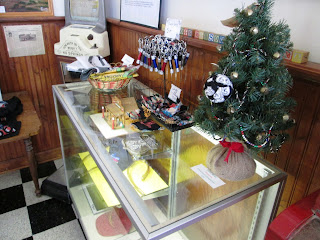