If poor Robin's day yesterday -- working alone with 48 visitors and still not entirely recovered from her bronchitis -- could be described as insane, then today was relatively sane by comparison.  For no reason we can understand, we only had 12 visitors today.  At this time of year, you never can tell.  Today, Ron M., Tattoo Man, Marly, and Robin were all present for all or part of the day. 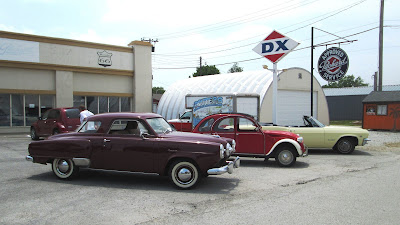 It's not often that we take several cars out of the showrooms at once, but today Marly had to get  the Studebaker out, and in order to do so, it was necessary to move the '65 Chevy and the Citroen. Photo op!   Marly is using the Studebaker to transport a bride to her wedding tonight.   She had her pick of any of the cars, but she chose the Stude.  We're a little skeptical about how it will go since 1) there's no air conditioning, 2) there's not much room in the back seat wherer the bride and her flower girl plan to sit, and 3) it's beginning to rain.  I do hope all goes well with the plan!

Visitors came from Kansas City KS, Leavenworth KS, Torino Italy, Hamilton Ontario Canada, Bartlesville OK, and Redditch (near Stratford-Upon-Avon) England.   This lovely young couple came from Torino, Italy.   They're brave enough to be riding all of Route 66 on motorcycles and have no English.  I'm sure the friendliness of all of us who have businesses on Route 66 will carry them through just fine. 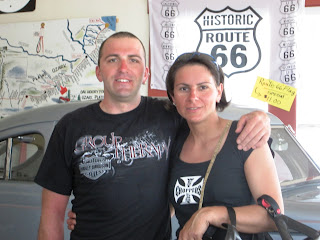 In the afternoon, these two fun-loving and beautiful women arrived from Redditch, England.  Before we even realized they were traveling with husbands (who were lingering outside), they were posing for this little bit of "cheesecake" -- two sexy ladies with a sexy DeSoto!    We all enjoyed these folks so much.  Clearly, they are getting a lot of joy out of their holiday.  They spent some time taking photos of our restroom (I mean, loo...) which they found interesting and amusing.  Wish they could have stayed much longer! 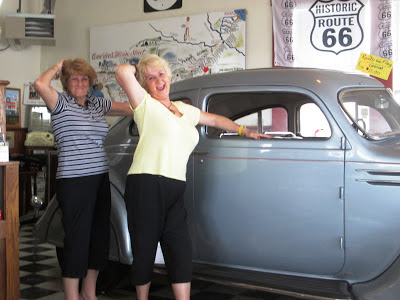 THIS JUST IN:   Marly texted to say that the bride forgot to call him to tell him that since it's raining, they don't need the Studebaker after all.   Just as well, Marly said, since the wipers quit and the windshield is leaking.   Too bad they didn't tell Marly earlier so he wouldn't have driven to the town where the wedding was to take place.  Although... any chance to drive that cool car can't be all bad...