Popping Corn. . . and not much else

The best I can say about today is that it was surprising.   I could also say it was disappointing, but since every day at Afton Station is a good day for me, I'll just stick with surprising.   Why, you ask?   Because Ron M. and I sat there ALL day, until nearly 3 o'clock, with ZERO visitors!  I wish I knew why, but I guess it's just the luck of the draw.  There was very little traffic passing by today either.  I wondered if it had anything to do with Father's Day, although in previous years we've had a number of families come on that day so Dad could enjoy the old cars.  But not today.

To assuage our boredom, we made (and ate) popcorn.  It was delicious and made the place smell like a movie theater as usual, but of course without a movie.   Michael Scruggs and a local frequent visitor, Scott, came by for a while.  Otherwise, many magazines were read and Sunday crosswords completed. 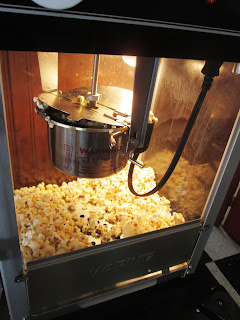 And then, as we were getting ready to close up, this lovely couple from Ruche, Switzerland appeared at the door.   They made the day worthwhile.   Despite having little English, they were full of smiles of appreciation, and we certainly appreciated their visit! 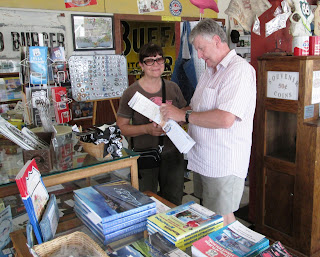 On the other hand, yesterday the visitors kept coming long after I left the Station.  When Marly was told he wouldn't be driving the bride, he brought back the Studebaker, and lo and behold, there were visitors at the door!   He visited with people from Ohio and Arkansas.

One more thing. . . today we saw a young man who appeared to be skateboarding Route 66.  He didn't stop, but he had an enormous pack on his back and was being followed by a guy on a bicycle with equally as large packs.   This is a first for us, and we wish they had stopped.  If anyone knows anything about this, I'd love to hear the details.

Here's a photo just sent to me from Jean from Australia who visited the Station with Laurie Garth on Thursday.   Laurie is in the middle, and no need to identify the other two. . . 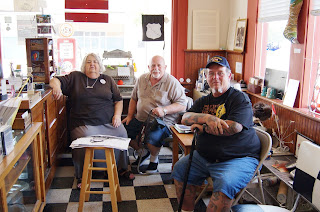 Glad some people finally came today and for their sakes, glad you were open. You've had several days recently with four, five or six dozen visitors, so surely your daily average is still pretty high this month. You have a great attitude--any day at Afton Station is a good one!