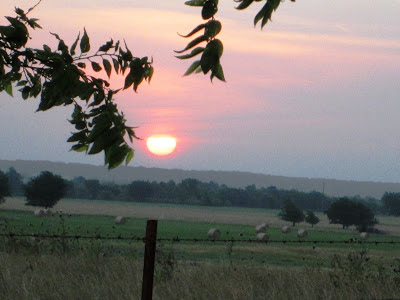 I was a little early on my way to Afton today, even after eating the absolutely, positively, unquestionably  largest sausage omelet in the world at Clanton's in Vinita.  (Actually, I ate a third of it and put the rest in the fridge at the Station, then forgot to bring it home tonight.)  Anyway. . . since I was still early, I took a little country side road for a mile or so just as the sun was rising and caught this pretty panorama.   A great way to begin a day!

Afton Station was a fairly quiet day today, but not so quiet as to make me unhappy.  I had my share of visitors, but they were well spaced, so I could chat with all of them.  They came from Cannock England,  Tamworth England, Alyangula Australia, Marshall MN, McPherson KS, Lyon France, and Tulsa and Oklahoma City, OK. 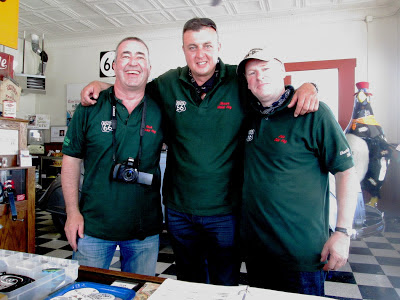 These three gentlemen from England arrived very early while I was still opening up, and they caught me in a true frenzy because I couldn't unlock the door to the rear car showroom.  I've had this trouble in the past, but it has never before proved to be impossible even to turn the key.  One of these awfully nice guys immediately took the key from me and worked on it himself.  He was successful, but not until applying a lot of force to the key.  (Marly came later and fixed the problem, a matter of the building settling and disrupting the key mechanism.)   The British guys were on motorcycles and call themselves the Wild Hogs.  They're riding for a charity, a hospice that at one time served all of their parents.  I was happy to make a small contribution to the cause.   Great guys!!! 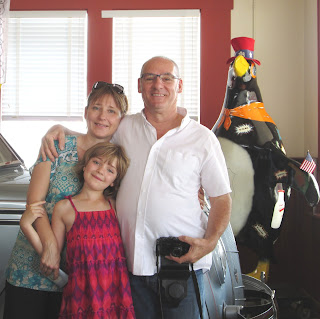 This handsome family from France was the last in the door late this afternoon.  Lovely folks who seemed to be enjoying their American holiday.  They spoke very little English, but the father was able to tell me that he's a musician and that his wife had given him the Route 66 trip as a surprise gift.  I had a little time to practice my horrific French, but they did seem to understand most of what I said.  He's making a movie about the differences between road trips in France vs here in the U.S.  I'll let you know when he puts it on YouTube.

Demolition started today on the World's Largest McDonalds at the service plaza in Vinita.  I checked it out on the way home, and indeed there are people and trucks all over the place.  Should be interesting to watch the progress.
Posted by Laurel at 5:12 PM

That should be a a great trip video

Thanks, Susan. I have every intention of checking out Danny and Jackie's blog, just as soon as I have a few moments without interruptions and distractions. Hoping that happens soon, because I do look forward to the blog.