. . . had one of those days when you just felt discombobulated all day?   Today was that day for me.  I can't pinpoint the problem.  I just felt disorganized and kind of "messy" from the time I woke up until just now.  It's not that anything really unusual happened today.  In fact, it was a rather ordinary day at Afton Station.  By "ordinary", I mean a busy day filled with mighty cool visitors.  Here, then, are some of them..... 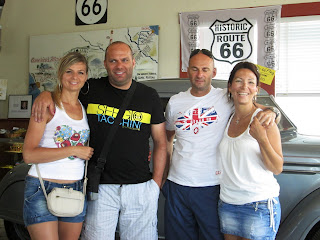 These early morning visitors were from Hungary, a town that I certainly can't pronounce and actually couldn't read in the Guest Book.  It appears to be Vestprem,  I'll look it up on Google later.  One spoke pretty good English, and he let me know that not only were the foursome going to do the full Route 66 trip, but they had already been on quite an extensive exploration of the southern U.S.   Very nice!  [Added later -- their town is Veszprém.  Ron M. looked it up.  Thanks, Ron!] 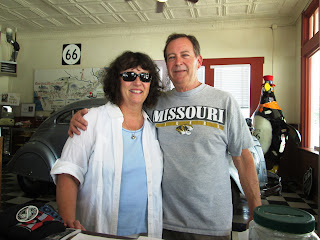 This couple from Ashland, Missouri is heading for Tucumcari, New Mexico to spend a night at the world-famous Blue Swallow.  Lucky folks! 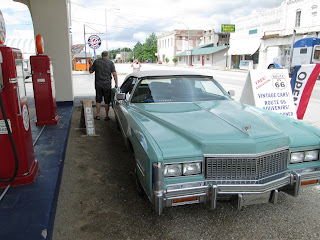 This gorgeous '76 Caddy was transportation for two couples from Melbourne, Australia.  They bought the car in Chicago at the beginning of their Route 66 trip and plan to ship it  home when they're done.  I love the color of this car, although the shadow doesn't do it justice in the photo.  They had negotiated for the Cadillac for a month, sight unseen, but are quite happy with how the deal came out.  The car's in great condition.  The only problem is fitting the luggage of four people in a trunk that's mostly taken up with a big spare tire!

We also had visitors from Miami OK, Kalamazoo MI, Branford Ontario Canada, Broken Arrow OK, Black Hills SD, and Bargerville, IN.  The Canadian men are truck drivers headed to Texas who had been past the Station many times before but finally had time to come in for a visit.  The South Dakota men are working across the street, tearing down the old feed mill.  They let us know that the grain elevator towers will remain standing.  That was good to know, as Afton town folks had been worried about the loss of their only "skyscraper".  :-)

Among the gang of regulars who stopped in today were Betty, Tattoo, and Marly.   Ron M. was with me again as well.    See you on Tuesday, when I trust I'll feel a little less undone.